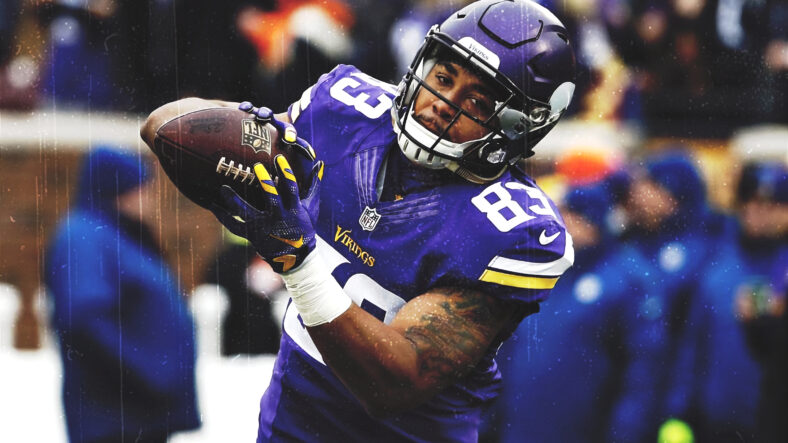 The Minnesota Vikings have some TE issues as of early August, mitigating a thumb injury to Irv Smith and deciding who is the TE2 on the depth chart accordingly. Meanwhile, a former Vikings tight end landed with the Atlanta Falcons on Monday.

In the middle of the 2016 season — the year that started white-hot for Minnesota but unceremoniously crumbled after the bye week — Pruitt was demoted to the Vikings practice squad. A month later, Pruitt was released and signed with the Chicago Bears.

Since then, the veteran tight end has become a total journeyman, spending time with eight franchises (including Atlanta). Pruitt has played for the Vikings, Bears, Bills, Texans, Titans, 49ers, and now Falcons.

During his career, the ex-Viking has tallied 46 receptions for 488 yards and seven touchdowns in 79 games. All of his career touchdowns occurred with the Tennessee Titans.

With the Falcons, he’ll battle for a roster spot as personnel trimdowns begin on August 16th. NFL teams must cut five players from the active 90-man roster, five more on August 23rd, and set the number at 53 players by August 30th. This is the Falcons current TE depth chart:

From that group, Pruitt is likely to nestle in around TE3 or TE4.

Pruitt was drafted three spots ahead of former Vikings wideout Stefon Diggs, now a member of the Buffalo Bills. He was part of the Vikings trade (via draft picks) with the Detroit Lions that sent EDGE rusher Danielle Hunter to Minnesota in the 2015 NFL Draft.

The Vikings won’t play the Falcons this year in the regular season but are slated for a road game in Atlanta during the 2023 season.