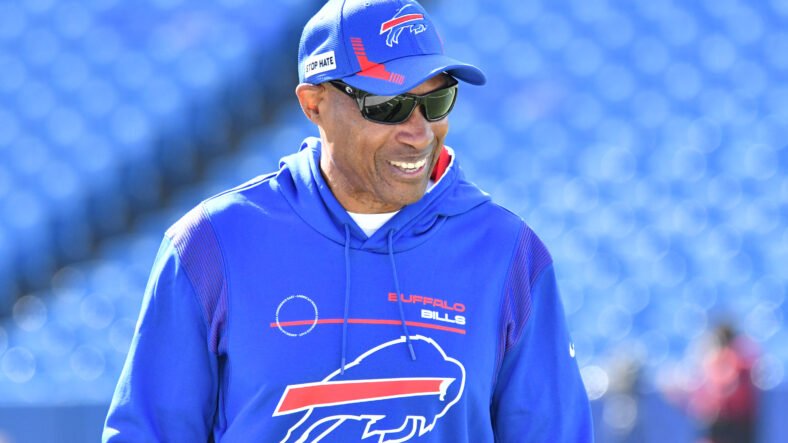 Leslie Frazier was named the Minnesota Vikings interim head coach during the 2010 season while serving as the assistant head coach and defensive coordinator. He then became the full-time head coach from 2011-2013. That’s been the last time he’s held the title since, and he’s itching to get another opportunity.

Minnesota fired Frazier following a 5-10-1 season in 2013. In four years with the Vikings, he compiled a 21-32-1 record posting a single winning season in 2012 when Minnesota finished 10-6. He returned to a defensive coordinator role with the Tampa Bay Buccaneers in 2014 and held that position for two seasons.

Talking on the AP Pro Football Podcast, Frazier noted his disappointment in not landing another opportunity at a head coaching gig, saying, “I’d be lying if I told you that I felt like it would take this long to have that opportunity come along, especially after some of the success and particularly the most recent success we’ve had in Buffalo. So it’s discouraging in some ways, but you just have to be able to control what you can control. I’m going to do the very best I can and help us to have another good defense in 2022 and help the Buffalo Bills win as many games as we can and put us in a position to compete for the world championship.”

The former Vikings coach landed interviews with the New York Giants and Miami Dolphins this season, but both teams wound up going in a different direction. Although the NFL has pushed to expand opportunities for minorities in their coaching ranks, Frazier hasn’t found his ultimate goal yet. It’s also notable that while the Bills defense has been good under Frazier, he may be coaching the wrong side of the ball. With a focus on offense, many teams are looking for the person that can help their organization put up points.

Speaking specifically about the opportunities he interviewed for this offseason, Frazier said, “Two of those cases, they said we would prefer to go with an offensive coach and they pointed to their young quarterback as the reason. And, I said this to both teams that I think I would do a good job of hiring a strong offensive coordinator, even though my background is defense. There have been a lot of defensive head coaches that have won Super Bowls in our league because at the end of the day, you need the right leadership [..] It’s unfortunate. I think it’s very narrow-minded to only see the head coach as an offensive guy because you have a young quarterback. You need the right leader in that role because you’ve got to be able to handle multiple responsibilities, not just call offensive plays. I just think that’s a misguided approach, but I’m not the guy doing the hiring.”

At 63 years old, Frazier could be running out of opportunities with teams looking to go younger or more innovative. He remains employed by the Bills this season but certainly has aspirations of the head coaching title in 2023.

The Vikings 11 Projected Starters on Offense

What’s on Kevin O’Connell’s Mind Football-Wise while on Vacation?