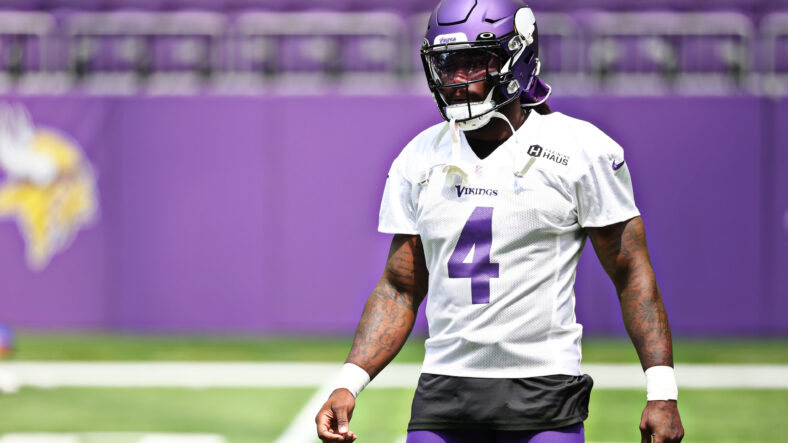 Eddie George, a former star running back, talked about his favorite running backs to watch in today’s NFL, besides Derrick Henry. Henry would be his obvious top choice, as he played for the Titans, and Henry is arguably the best back in the game.

George was a Heisman trophy winner in 1995 at Ohio State and became the 14th overall pick in the 1996 draft. With his 6’3″, 235 lbs frame, he had some similarities to Henry — a powerful and oversized halfback that can just run all over opponents.

George became the head coach of the HBCU Tennessee State in 2021.

He also contributes to the33rdteam.com, a website that shares analysis of former players, coaches, and administrators, where he named the most entertaining running backs.

His first choice was Jonathan Taylor. The Colts’ back is the total package, as he combines speed, power, and vision. All of that helped him to secure the rushing title in 2021. He led the league in rushing yards and touchdowns, both by a wide margin.

Najee Harris, the Pittsburgh Steelers running back, was George’s next mention. He led all rookies in rushing yards, and his 1,200 yards ranked him fourth in the league. However, the 3.9 average yards per carry were underwhelming. His size, combined with his advanced skillset, makes him an intriguing player.

“And also Dalvin Cook at Minnesota,” George said about the Vikings’ running back. “I don’t think he gets enough credit, but he’s the ultimate game breaker. If he’s healthy, I think he can easily be the best back in the league.”

Vikings fans know that their running back is a fantastic player, as Cook came into the league and immediately looked different. His first preseason touches were electric, just like the start of the regular season. In Week 4, Cook tore his ACL and missed the remainder of the season. Not only that, but he also didn’t get back to that explosiveness until the end of the season and, therefore, had a bad 2018 with plenty of infective games.

In 2019, however, Cook had a great season and had sustained that level of play ever since. Despite missing eight games in the last three seasons, he still only trails Derrick Henry in rushing yards with 3,851. His 35 touchdowns are also second, again only trailing Henry. The third best in that span had just 29.

Cook has a career average yards per game of 86.1, ranking him 7th in NFL history. He’s only trailing all-time greats like Jim Brown, Barry Sanders, or Eric Dickerson.

The Vikings are expected to pass more in 2022 under new head coach Kevin O’Connell. However, it would be foolish not to feature one of the elite backs in the NFL. He’ll still get a ton of touches, but his usage could look different. Cook might be more involved in the passing game and has fewer runs, instead. That could be a great way to get the running back the ball in space, where he can use all of his skills.

Cook is a magician. He’s elite at making opponents miss, and it doesn’t matter if it’s in the box or the open field. His number of missed tackles forced, per PFF, ranked him 6th in 2021 and 2nd in 2020.

Cook’s speed is elite, and he uses it to make people miss; the Vikings running back can simply outrun them.

While his 2021 season was a down year, he still had the 5th most rushing yards in the NFL, despite only playing in 13 games. Only injuries can slow him down, but if Cook is healthy in 2022, there’s no reason why he can’t continue to be one of the best running backs in the league.

After Years in Court, Prince’s Estate is Finally Settled

What you need to know about E. coli O157:H7 and its complication during an Outbreak

The Vikings Top Defensive Performers vs. Packers, per PFF