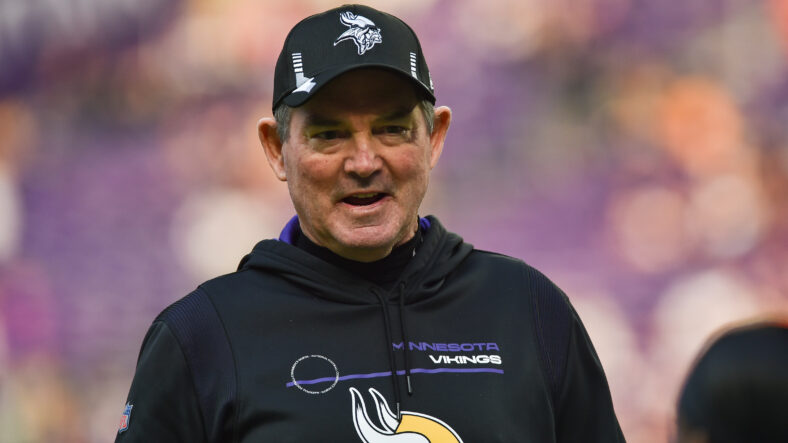 Zimmer defensively coordinated the Bengals from 2008 to 2013.

The Vikings terminated Zimmer and his boss Rick Spielman on January 10th after back-to-back losing seasons. Generally speaking, the Zimmer era in Minnesota was a success as the franchise ranked 10th in the NFL per win percentage. However, the Vikings reached the postseason just thrice in eight seasons while winning two playoff games.

Aside from an apparent analyst gig at The33rdTeam.com, Zimmer has been quiet this offseason, even though he likely could’ve landed a defensive coaching job somewhere in the league.

It is unclear why Zimmer was at Bengals practice, although some NFL brains have predictable theories. Will Koshover, the editor of LastWordNFL, tweeted about Zimmer’s presence at Bengals camp, “I have a feeling we might be seeing Mike Zimmer with the Bengals very soon.”

With the Bengals, Zimmer’s defense was terrific. From 2008 to 2013, Cincinnati’s defense ranked sixth in the NFL per EPA/Play with Zimmer as defensive coordinator. Thereafter, from 2014 to 2021, the Bengals placed 24th in the same metric — or ninth worst.

The Bengals unexpectedly sprinted to the Super Bowl in 2021 as second-year passer Joe Burrow dazzled, Cincinnati’s defense flexed in the playoffs, and a little bit of luck carried the franchise to February. In the Super Bowl, however, the Bengals lost to the Los Angeles Rams — a team the Vikings tapped for offensive coordinator Kevin O’Connell. Minnesota hired O’Connell to replace Zimmer.

Moreover, the Bengals aren’t strangers to Zimmers. At the end of July, Cincinnati hired Zimmer’s son, Adam, as an offensive analyst. Adam Zimmer was the Vikings co-defensive coordinator in 2020 and 2021, along with Andre Patterson.

If the Zimmer-to-Bengals prediction comes true, it is unclear what role he’d fill on the coaching staff. Lou Anarumo has been the team’s defensive coordinator since 2019. Perhaps Zimmer would land a “defensive analyst” job like his son on the offensive side of operations.

Packers Could Be without All-Pro vs. Vikings in Week 1