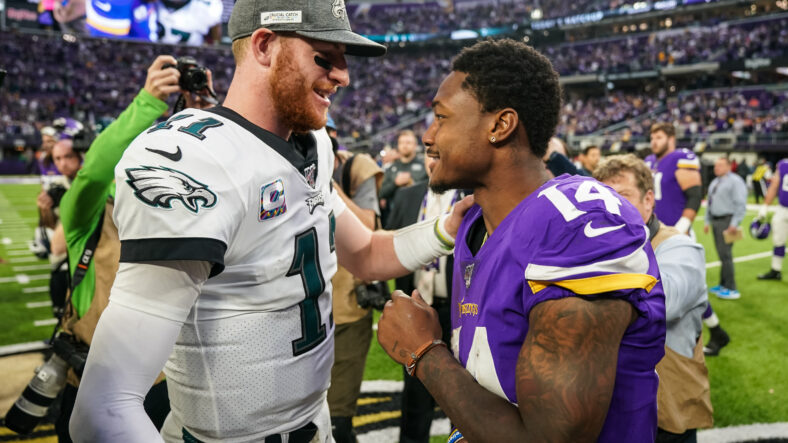 The Vikings faced the Eagles 14 times in the regular season and three times in the postseason. On Monday Night Football, it will be the 18th matchup of the two organizations in Philadelphia.

Of those 17 games, 14 took place in the regular season. Each team was able to grab seven wins. In the three postseason games, the Eagles are still unbeaten.

The Vikings also lost their lone playoff game at home against the Eagles. In addition to that, Philly obviously won the Super Bowl in U.S. Bank Stadium. The all-time regular season record is 15-10 in favor of the purple team.

Kirk Cousins played in nine games against the Eagles. During his time in Washington, he regularly faced them as a divisional opponent. Since he became a full-time starter in 2015, Cousins has gone up against the Eagles eight times, and his passer rating in those eight games was 105.2 with a touchdown to interception ratio of 18-5. He also totaled 291.1 passing yards per game.

In two games against the Eagles as the Vikings signal-caller, Cousins managed to record a ridiculous passer rating of 125.6. He scored five passing touchdowns in those games and averaged 317 passing yards. In his five games in Philadelphia, his rating is 112.1. No quarterback in NFL history had a better rating. In his nine starts against the Eagles, Cousins-led teams pulled off a victory six times.

Ring of Honor running back Chuck Foreman had the most single-game scrimmage yards of any Vikings in the matchups between the two franchises.

Only Culpepper’s performance didn’t lead to a Vikings victory.

In their Week 1 38-35 win over the Lions, the Eagles rushed for the third most yards in the NFL that week. They had 219 rushing yards and a league-high four rushing touchdowns from four different players.

On defense, however, they have allowed the fifth most. The Lions’ averaged 6.5 yards per carry and overall gained 181 rushing yards.

The two star receivers, AJ Brown and Justin Jefferson, have never played the opposing team before. Brown missed the 2020 game with the Titans against the Vikings.

The Eagles DVOA in Week 1 on offense was 7th in the league. The Vikings, meanwhile, were 2nd. However, both teams had similar splits, as the Eagles were 9th in passing and 6th in rushing, while the Vikings were 7th and 9th, respectively.

The defensive numbers look eerily similar as well. The Eagles rank 21st, the Vikings 18th. Both teams rank average in passing defense and near the bottom of the league in rushing. However, most of those numbers came in a garbage time scenario. Both teams played soft coverage and light boxes and allowed some garbage time numbers, even if the Eagles almost blew their big lead that way.

AJ Brown recorded 155 yards in Week 1, also a career-high. He needs 129 yards to tie Hill. He has done that six times in his career.

The Vikings have not won a Week 2 game since 2016, when the Packers came to town to open U.S. Bank Stadium.

The Eagles, meanwhile, have the exact same troubles. Their last win in Week 2 came against the Bears in 2016. The two starting quarterbacks were Jay Cutler and Carson Wentz.

Running quarterbacks give the Vikings issues.

In 20 of his 21 career starts, including postseason, Hurts attempted more than that. The new defensive scheme may help.

3 Bold Predictions for Vikings vs. Cowboys