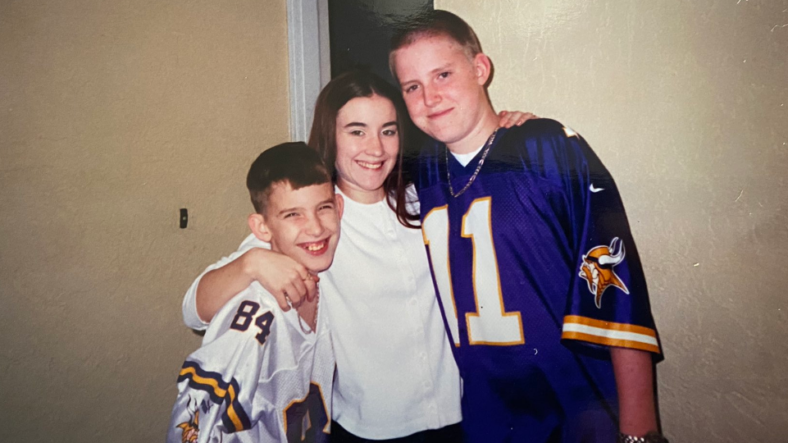 Jason’s family needs financial assistance for “funeral expenses which include getting him transported from Orlando, Florida to Mecklenburg, New York.” If you are a person of means, just want to do the right thing — or both — Jason’s GoFundMe page is located here.

Described as “a good son, brother, and uncle to his family [with] an infectious smile and loved talking with people,” Jason was also an ardent Vikings fan. His brother explained to VikingsTerritory that Jason was “born into it” and that “nobody chooses this pain,” a homage to the Vikings Super Bowllessness of the last 61 years. Still, Jason loved the purple and gold team, just like many of you reading this.

A third-generation fan, he latched onto the Vikings for a simple reason — they were his dad’s team. Such is the case for many Vikings faithful, and Jason got into Vikings football at a rip-roaring time as Daunte Culpepper and Randy Moss were at the peak of their powers. Jason’s father was born in Minneapolis, raised his kids in Orlando, and the family never deviated from Vikings fandom.

Before he passed away, Jason’s current favorite players were Adam Thielen, Justin Jefferson, and Harrison Smith.

Marfan Syndrome has treatments but is not curable. Jason was hospitalized more often than not over the last three years and spent four months of 2022 in the hospital dealing with blood clots, blood infections, and ultimately a pulmonary embolism. The syndrome is a genetic condition that adversely impacts the body’s connective tissue.

Jason still has a family imprint in the Duluth area. He and his brother became hardcore Vikings fans in elementary school, wearing “Three Deep” shirts as part of a routine wardrobe. Jason was also known for the utmost Vikings positivity; the team didn’t have players he disliked. If they played for Minnesota, that was good enough for him.

Jason’s brother is an active member on “VikingsTwitter,” a community of social-media-savvy folks who discuss the Vikings daily. You can drop him a note, @SkolFather.

On the GoFundMe side, Jason’s family told VikingsTerritory that funerals are rather expensive and anything from readers will help. Donations “will go directly towards all the necessary funeral home costs, transportation fees, necessary permits to transport Jason, cemetery burial and headstone fees, and church service fees, etc.”

Jason’s favorite Vikings moment was in January 2018 when Case Keenum connected with Stefon Diggs to stun the New Orleans Saints with The Minneapolis Miracle.

Again, you can donate to Jason’s family here.