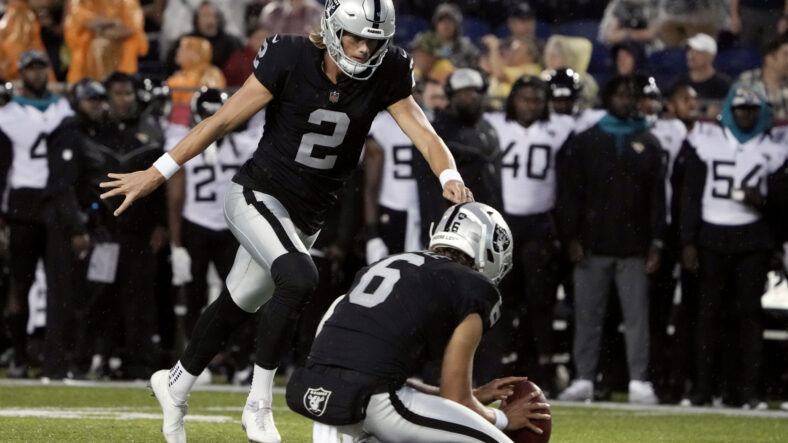 All other teams will have already played a game when the Minnesota Vikings will open their preseason on Sunday against the Las Vegas Raiders in Allegiant Stadium, the home of the Pro Bowl in 2023 and the Super Bowl in 2024. The Raiders won their first preseason game against the Jaguars in Canton, Ohio, at the Hall of Fame Game.

When they do take the field, these are extra storylines to consider.

Multiple Raiders were formally employed by the Vikings. Ameer Abdullah, the running back, played for the purple team between 2018 and 2021. He appeared in 45 games as a backup running back and special teams player. Abdullah recorded 360 scrimmage yards and three scores.

Kicker Daniel Carlson had a short and infamous tenure in Minnesota. He was a fifth-round draft pick and was supposed to be the cure to all kicking concerns. The kicker missed three kicks against the Packers, and the Vikings waived him immediately after the game ended in a tie. Subsequently, the Raiders picked him up, and he has looked like a potential Hall of Famer since. The Vikings should’ve been more patient with Carlson and tried to fix some mechanical issues. He is a back-to-back NFL scoring leader and a 2021 second-team All-Pro.

Defensive end Tashawn Bower had multiple stints in Minnesota. He appeared in 11 games and recorded one sack. Overall, he provided depth when he was on the 53-man roster or was part of the practice squad.

2. Will Vikings Rest the Starters?

Head coach Kevin O’Connell worked for the Rams last season as offensive coordinator. Head coach Sean McVay rested all starters last year in the preseason. Even some valuable backups didn’t play. The assumption is that O’Connell does the same here in Minnesota.

However, a different approach could be that he wants to infuse a winning culture and tries to win his first game, so he needs the starters to play. Both ways are a possibility. Quarterback Kirk Cousins won’t play because he tested positive for COVID-19. Stars like Justin Jefferson and Eric Kendricks could get the day off, just like players with an injury history like edge rushers Danielle Hunter and Za’Darius, or running back Dalvin Cook.

Aging players Patrick Peterson and Harrison Smith could also use some extra rest. Everything is possible between everyone plays and no starter plays. The fewer starters appear in the game, the more chances the backups get.

Kellen Mond and Sean Mannion are currently competing for the backup job for quarterback Kirk Cousins. Mond was a 2021 third-rounder. He gained a lot of experience in college for Texas A&M, however, his struggles in camp are real. Mond is physically gifted, as he can run and has a strong arm. His problems are in the decision-making, and apparently, accuracy is an issue.

Mannion, meanwhile, is a veteran in the league. The 30-year-old was a third-round pick in 2015 by the Rams, where he spent the first four seasons of his career. After two seasons as a backup in Minnesota, he signed with the Seahawks in 2021 but was released on final cut day. The Vikings immediately brought him back.

After the season, Mannion was a free agent once again, but the Vikings re-signed him to a one-year contract. He is an incredibly smart player and helps Kirk Cousins prepare for games. While that assignment is an important and underrated job, Mannion is not the quarterback teams want on the field if something happens to their starting quarterback. His play is uninspiring, and he lacks physical ability. In his few opportunities, he didn’t show the ability to lead the team to victories.

Neither is playing at a high level in training camp, so the Vikings might want to add another quarterback to the mix. However, they have a chance to show their abilities in the preseason game to win the backup job.

If the rookies end up playing, and usually they do, Vikings fans will get their first glimpse of the 2022 rookie class. First-rounder Lewis Cine is still stuck with the second-team because second-year player Camryn Bynum is having an outstanding camp.

Second-rounders Andrew Booth and Ed Ingram are getting first-team reps at times. Veteran cornerback Cameron Dantzler seems to hold off Booth with a good camp, while guard Jesse Davis is close to losing his job to Ingram. Ingram practiced with the first team on multiple days, including when Davis was active.

Third-rounder Brian Asamoah might show flashes with his explosiveness. He’s a small but extremely fast linebacker. Akayleb Evans, the fan favorite, worked at times with the second-team at cornerback. Wideout Jalen Nailor showed his impressive speed at times during camp, just like running back Ty Chandler. Both will likely see a lot of playing time.

Offensive tackle Vederian Lowe fights for a roster spot and has to perform well in this game. The same is the case for defensive lineman Esezi Otomewo. The former Golden Gopher is part of a crowded position group. Tight end Nick Muse surprisingly faces tough competition for a roster spot after the emergence of Zach Davidson.

5. Half of the Players Fight for Career

Ninety players are currently on the roster, but only 53 will be left after the final cuts. On Tuesday, the Vikings have to cut five players. There are about 40-45 players saved. Everyone else is fighting for a roster spot. Some players who’ll be free agents might find another team or a practice squad. Some of them, however, won’t make it in the NFL and their careers are over rather quickly. Therefore, they play their hearts out as if it is the Super Bowl.

Especially undrafted players have to prove teams wrong. The Vikings have two big names undrafted rookies, Zach McCloud and Luiji Vilain. Both are edge rushers among the highest-paid players in this year’s UDFA class. They might have a future in the league. However, other UDFAs might not get a second shot. For example, center Josh Sokol played his college ball at Sacred Heart University — a small school player who went undrafted and might not be on any team’s radar will definitely give it his all.

You Should Prepare for the Vikings to Lose Keenan McCardell