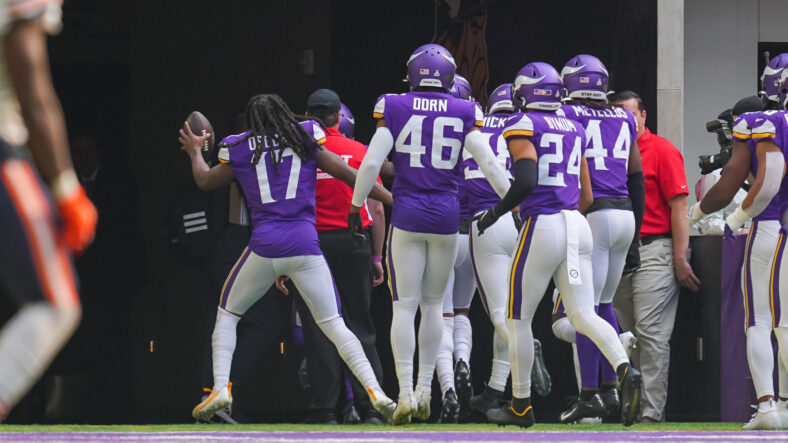 Oct 9, 2022; Minneapolis, Minnesota, USA; Minnesota Vikings wide receiver K.J. Osborn (17) and the team leave the field after a turnover against the Chicago Bears near the end of the game at U.S. Bank Stadium. Mandatory Credit: Brad Rempel-USA TODAY Sports

This is Episode 138 of VikesNow, a YouTube channel devoted to daily Minnesota Vikings analysis. This episode examines the aftermath of the Vikings win over the Bears in Week 5.

Particularly, Kirk Cousins, Greg Joseph, and the feasibility of winning the NFC North are discussed.

The Vikings knocked off the Chicago Bears in Week 5, 29-22, courtesy of another game-winning drive from Kirk Cousins and a wild fumble yank-away by cornerback Cameron Dantzler. Minnesota’s defense was up to its old tricks, falling asleep during the game’s midsection while rising up in the 4th Quarter. It’s become a trend.

The Vikings are early three-point road favorites against Miami Dolphins in Week 6, who lost in Week 5 at the New York Jets, 40-17. The Green Bay Packers lost in London to the New York Giants, enabling Minnesota to sit alone atop the NFC North, at least for two weeks. The Vikings are also the No. 2 seed in the NFC behind the Philadelphia Eagles and would host a home playoff game if the playoffs started today.

Minnesota’s offensive line continues to jell, a total change of pace from any season since 2012. Tackles Christian Darrisaw and Brian O’Neill are performing masterfully, Garrett Bradbury isn’t horrible all of a sudden, and then guards Ezra Cleveland and Ed Ingram are holding their own. It feels like a brave new world for a Vikings team to keep quarterback Kirk Cousins upright.

12 Snap Reactions after Vikings at Packers

Harrison Smith Has Lunchpail Attitude about Hall of Fame