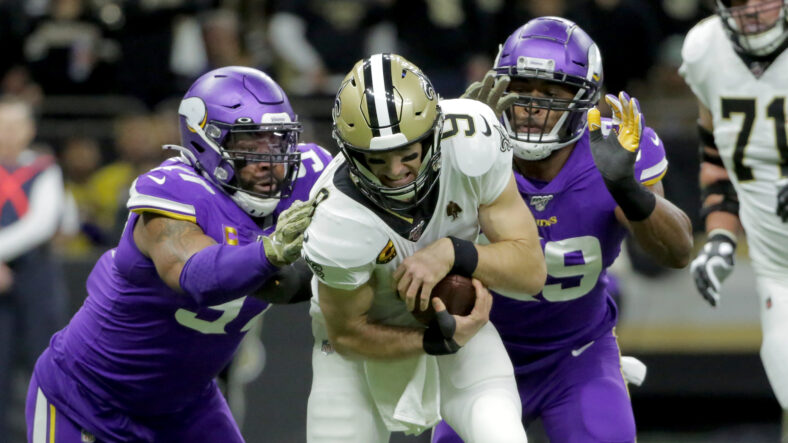 Some NFL team will realize in August that it needs more depth at pass rusher, and according to Pro Football Network, ex-Minnesota Vikings defender Everson Griffen should be the first to receive a phone call.

Griffen was not re-signed by the Vikings during 2022 free agency and remains available on the open market.

Spending 11 seasons with the Vikings, Griffen tabulated four Pro Bowl trips and 79.5 sacks from 2010 to 2019 and in his 2021 return. Last year, Griffen performed surprisingly well back with Mike Zimmer’s Vikings but took the rest of the season off after Week 10 to remedy his mental health. Minnesota lost Danielle Hunter in a game against the Dallas Cowboys on October 31st, and for a few weeks, Griffen was the saving grace for opposing quarterback pressure.

But this offseason, new general manager Kwesi Adofo-Mensah signed Za’Darius Smith away from the Green Bay Packers, all but ending the likelihood of a Vikings-Griffen reunion, at least in a starting capacity.

Griffen told a St. Paul newspaper in February he had no plans to retire after finishing his 12th season in the league. “Yeah, of course, I’m looking to play again this season,” Griffen said to the Pioneer Press’ Chris Tomasson.

Assuming Griffen deems his mental health in a comfortable place, Griffen should be sought by a team this month. His former defensive line coach Andre Patterson now coaches linemen for the New York Giants, making the NFC East a logical landing spot for the USC alumnus. The Atlanta Falcons, Kansas City Chiefs, Jacksonville Jaguars, and Tennesse Titans could also use pass-rushing upgrades.

Moreover, because the Vikings employ an injury-prone twosome at EDGE in Danielle Hunter and Za’Darius Smith, Griffen returning to Minnesota, on paper, also adds up. But that likely would’ve happened by now, and all of the Vikings “ties to Griffen” were lost with the departures of Rick Spielman and Mike Zimmer in January.

“It’s Going to Be Government Money”

Per PFF, the Vikings Top 2022 Players from Best to Worst: After Week 2