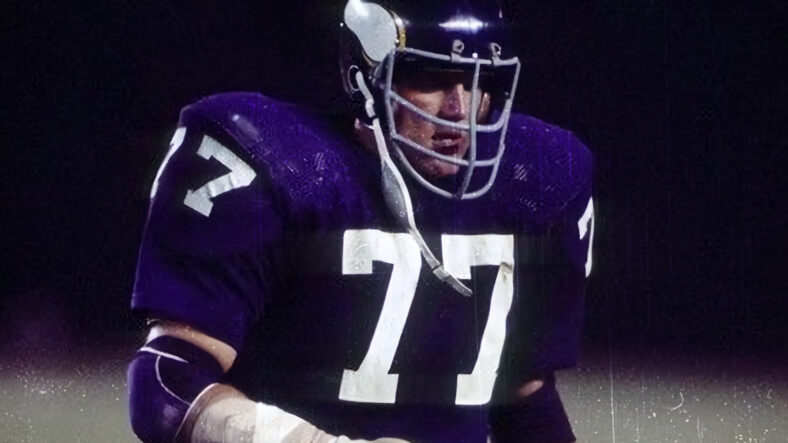 The ‘Purple People Eaters’ dominated the NFL for almost a decade, from the late 60s to the late 70s. They were a scary opponent, and no one wanted to face them. A group of relentless warriors hunting for quarterbacks. They also embraced the cold in the Metropolitan Stadium, which only made them scarier. They played for the Vikings, but they might just be that, true Vikings.

Four players were part of the original ‘Purple People Eaters,’ but most people remember only three of them. Alan Page, Jim Marshall, and Carl Eller. They were tremendous players, and rightfully, all Vikings fans remember the scary pass rushers. The problem is that they could only be that successful at getting to the quarterback because Gary Larsen defended the run in the middle of the line. That’s why he is also called ‘The Policeman.’

Alan Page is one of the greatest defensive players in NFL history and probably the greatest in Vikings history. Lawrence Taylor often gets credit for winning the MVP as a defender, one of only two. The other one was Page, who did it first. The defensive tackle is also a two-time defensive player of the year and a six-time first-team All-Pro. He played for the Vikings between 1967 and 1978.

No matter how great he was as a football player, his greatest accomplishments came off the field. During his playing days, he attended the University of Minnesota Law School and later became a judge at the Minnesota Supreme Court, the first African American to serve on that court. He was awarded the Presidential Medal of Freedom in 2018.

Jim Marshall played as a defensive end opposite Carl Eller. He played for the Vikings from 1961, the first season in franchise history, until 1979. He played 270 consecutive games for the purple team. A record he held for a long time until Brett Favre broke it.

His 30 recovered fumbles are an NFL record to this day, and the 127 sacks rank him second in franchise history, only trailing Carl Eller. His absence from the Hall of Fame is still something Vikings fans can hardly accept. He was the leader of one of the most well-known defenses in NFL history and one of the toughest and most durable players of all time. He was one of the multiple iron men on the roster. Marshall, Page, and legendary center Mick Tingelhoff were at one point in the 70s the three players with the most consecutive starts in NFL history.

Carl Eller was the other defensive end. He played his college ball in Minnesota and then was the Vikings’ first-round pick in 1965. He was part of the organization until 1978. In 1971. Eller won the Defensive Player of the Year award and was a five-time first-team All-Pro. After waiting for 25 years, he was elected to the Hall of Fame in 2004. During his tenure with the Vikings, ‘Moose’ was credited with 130.5 sacks, the most in franchise history.

Larsen is not as popular as the other three. However, he should be. The reason is simple. Just like defensive tackles nowadays, he didn’t focus on rushing the passer. He tried to stop the run. Larsen made sure to have the pass rusher’s back and defended the run as well as anyone. He didn´t have the speed of the other three but was incredibly strong with his 6´5″, 265-pound frame.

He was born in Fargo, North Dakota, and played college football at Concordia-Moorhead. They did not play with 11 men per team; they played eight vs. eight. He later said it was “more of a speed game than 11-man.” His favorite sport in high school was basketball. After one year at Concordia, Larsen joined the Marines, where he continued to play both sports. He later returned to Concordia to play varsity football.

Larsen still found a way to become an NFL player. The Rams selected the defensive tackle in the 1964 draft in the 10th round. He was the 133rd overall selection. In his lone season with the Rams, he backed up another legendary front, the ‘Fearsome Foursome’ with Deacon Jones and Merlin Olsen.

The Vikings traded for the player, and he became a ‘Purple People Eater.’ The trade compensation was the eighth overall pick in the 1965 draft, receiver Jack Snow who had a productive career in his own right. Larsen appeared in three Super Bowls with the Vikings. Sadly, he lost all three.

“We tried our damndest to win the three that we played in, but I consider myself pretty fortunate. The thing that you think about is at least you got there.”

As a kid from North Dakota, he was happy when the Vikings got a team in 1961. During that time, he was a Marine stationed in California.

“When Minnesota got a team, I used to kid my teammates in the Marine Corps. I said ‘I’m going to go back to college and someday play for the Vikings.’ I had no idea. They would laugh and say ‘Sure you are.’”

In 1969 and 1970, the defensive tackle was a Pro Bowler. The Vikings sent their complete defensive line to the event in 1969, proving how dominant the ‘Purple People Eaters’ really were during that time.

In 10 seasons for the Vikings, Larsen appeared in 135 games and recorded 37 sacks. He is also a member of the 50 Greatest Vikings. Larsen retired in 1974 as the first of the four ‘Purple People Eaters.’ His backup, Doug Sutherland, replaced him, but the ´Norse Nightmare´ will always be a part of the ´Purple People Eaters.´

How to Stream Apple Music on Fire TV Stick

Did the Vikings Win the Trade Deadline?

What We Learned after 2 Weeks of Vikings Training Camp

Saints Could Be without Top Weapon against Vikings in London