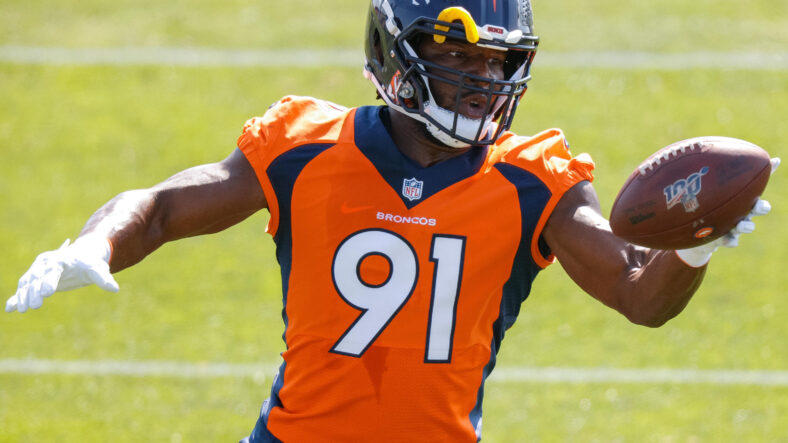 After the release of the Gabe Brkic, who competed with Greg Joseph for the kicker job, the Vikings had one open roster spot. Today they announced the signing of linebacker Andre Mintze.

The newest signing of general manager Kwesi Adofo-Mensah played his only NFL season for the Denver Broncos in 2021. He went undrafted but worked his way up to making the roster.

Mintze appeared in six games in his rookie campaign before we went down with an injury and was placed on the injured reserve. Overall he played 64 snaps on defense and 69 on special teams. Mintze received a 55.6 overall grade from PFF. His grade in run defense was better than his pass-rushing grade. In the preseason, the Vikings played against the Broncos. Mintze had one sack and one tackle for loss in the 33-6 win against his new team.

Before starting his NFL journey, he played his college ball at Vanderbilt, where he recorded 8.5 sacks and 17 tackles for loss in his career. In addition to that, he also forced three fumbles.

The starters of the Vikings on the edge are set with Danielle Hunter and Za’Darius Smith. Behind them, it’s an open competition. 2021 draft picks Janarius Robinson and Patrick Jones, undrafted free agents Zach McCloud and Luiji Vilain, and the 2020 rookie D.J. Wonnum are competing for spots on the 53-man roster. If he can make a strong impression in training camp and be a good special teams player, he has a chance to make the roster and be a solid depth piece for Ed Donatell´s defense. Mintze knows the scheme and his new defensive coordinator from last season when they were both members of the Denver Broncos.

The roster is now back to its full strength after the signing, with 90 men employed. Mintze will wear number 31 for the purple and gold franchise.

Janik Eckardt is a football fan who likes numbers and stats. He chose the Vikings as his favorite team, despite Christian Ponder being the quarterback at the time. He is a walking soccer encyclopedia, loves watching sitcoms, and Classic rock is his music genre of choice. Arguing about the Vikings on Twitter is one of his favorite things to do. Follow him on Twitter if you like the Vikings: @JanikEckardt

Shiba Inu Traders Experienced Lower Liquidations Than Other Altcoins Amid 12% Drop; Here’s Why

Vikings Players’ Reactions to Win No. 10

Vikings Do Trey Lance a Solid

Vikings May Have Rude Awakening for Patriots