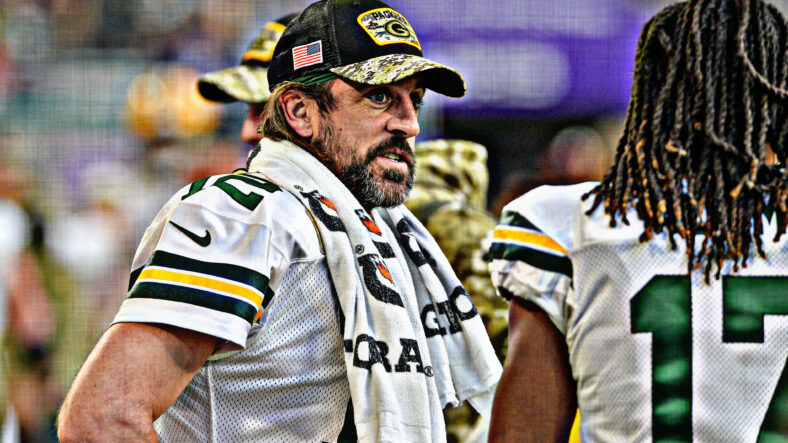 During the last two offseasons, the Minnesota Vikings deadliest foe has singlehandedly created offseason mystery about his future. He’s Aaron Rodgers, and in the 2021 and 2022 offseasons, Rodgers took a Favrian path regarding his “will I or won’t I play” status.

In 2021, on the first day of the NFL Draft, credible reports indicated Rodgers was flustered in Green Bay, suggesting a trade could be on the horizon for the Packers passer. Drama filled the spring and summer months before Rodgers posted a picture to social media, portraying the 2021 season as his “Last Dance” a la Michael Jordan and the Bulls.

But it wasn’t his Last Dance. The 2021 campaign was his final hurrah with wideout Davante Adams, who was also included in the “Last Dance” Instagram post. The Packers stunningly lost at home to the San Francisco 49ers in the 1st Round of the 2021 playoffs, decisively spoiling the cheesy (pun intended) Michael Jordan energy.

Then, after the disappointment courtesy of San Francisco, Rodgers waffled again for two months about his NFL future, subject to trade rumors with teams like Denver Broncos and Pittsburgh Steelers. He and the Packers front office squashed that chatter in mid-March when Rodgers signed a three-year, $150.8 million deal.

And Green Bay is where the future Hall of Famer will remain — undoubtedly. Rodgers was asked this week by reporters if he plans to finish his career with the Packers. Rodgers replied, “Yes, definitely.”

In some ways, Rodgers staying with the Packers seems like a no-brainer, especially for a soon-to-be 39-year-old who just signed a massive extension. However, this is Rodgers, after all, a man who’s used the Brett Favre offseason-drama playbook for two years consecutively. In seven months, when the 2023 offseason begins usual chatter, Rodgers to elsewhere via trade won’t be a common-sense talking point. The only item to decide for the veteran quarterback will be retirement or a return for Season #19.

Rodgers has long brutalized the Vikings, owning an unthinkable 56-touchdown to 7-interceptions split against his division foe. He racked up the wins over Minnesota early in his career and was only slightly slowed down by Mike Zimmer, who the Vikings employed as head coach for eight seasons. From 2008 to 2013, before Zimmer took over, Minnesota was 4-7-1 (.375) against Rodgers and the Packers. During the Zimmer era, the Vikings held a 7-8-1 (.469) versus Green Bay.

Now, Rodgers will get a crack at the Vikings skippered by an offense-first head coach in Kevin O’Connell. The Vikings hired O’Connell from the Los Angeles Rams in February, fresh off a Super Bowl triumph. And O’Connell, per Rodgers’ affirmation to reporters, will experience Rodgers as the Vikings primary enemy anywhere from two to eight times in the next few years — because Rodgers won’t don another team’s uniform.

Incidentally, the Vikings and Packers play at U.S. Bank Stadium to begin the 2022 season on September 11th.

Does a Win vs. DAL Finally Get Vikings Some Respect?