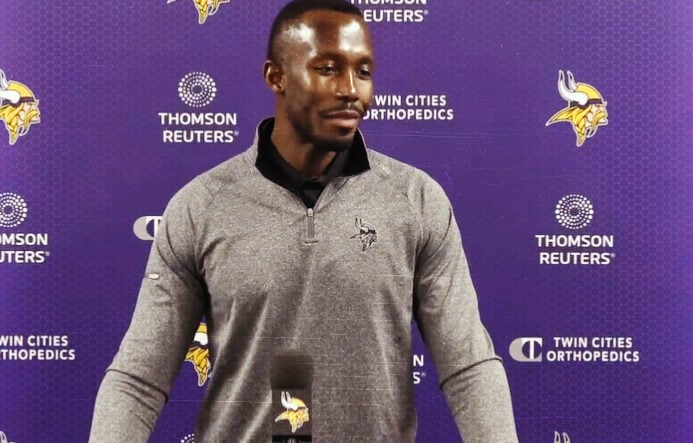 With the trade deadline approaching on November 1st, and the Vikings now on their bye week, attention has turned to the roster and potential trade targets for the team in purple. Given the Vikings new GM and his propensity for pulling off trades, it seems silly to rule out a potential Vikings trade in the next couple weeks.

Now, obviously, the biggest obstacle the Vikings must face in order to pull off a move prior to the deadline is the salary cap. The Vikings have the lowest cap space in the NFL, according to Over the Cap, sitting at $358,261. They are the only team with under $1 million to work with right now.

This hasn’t stopped fans from bringing up the fact that Odell Beckham Jr. is out there, and Kyle Rudolph has been nonexistent in the Tampa Bay Buccaneers offense. That said, the Vikings would need to free up substantial amounts of money to make a move with the magnitude of OBJ. With that said, how could Minnesota move money around in order to free up this space?

Look no further than their backup offensive linemen. Minnesota traded Jesse Davis prior to the season’s start, and that helped free up space to acquire Jalen Reagor from the Eagles. This time around, the Vikings might move a player like Chris Reed in order to bring in a new piece.

Reed was brought in by the Vikings during the off-season’s free agency period. Essentially, the veteran guard was meant to be a failsafe along the interior offensive line. Over the past few years, the play at right guard struggled immensely, and the Vikings wanted a veteran presence for the position.

However, his skillset has not been used by the Vikings due to the emergence of rookie Ed Ingram. The LSU product quickly snatched first-team snaps during camp for the Vikings, but Garrett Bradbury continued his struggles at center, allowing Reed to snatch some snaps in the middle.

Bradbury managed to hold onto his starting job though, and his play drastically improved through the first six weeks of the regular season. PFF has given Bradbury a grade of 65.0, easily the highest of his career.

Because of the emergence of Ingram and the improved play from Bradbury. the Vikings have not needed Reed this year. The veteran offensive lineman has not been activated for a single game this season.

Why a Trade Makes Sense

Chris Reed carried a $1.75 million cap hit heading into the regular season; far too much for a player that is not even being activated on a weekly basis. Obviously, trading Reed doesn’t free up boatloads of money, but it does go a long way towards adding a new weapon on the offense or some defensive depth.

Additionally, the Vikings could take an advantage of increased demand for offensive linemen around the league. There are many teams looking to make the playoffs that need help on their interior o-lines. The Los Angeles Chargers just lost their center this past week, and the Arizona Cardinals lost their left guard. The Los Angeles Rams and Tampa Bay Buccaneers have been trying to patch together o-line pieces all season.

The demand is certainly high, and it’s all among middling teams trying to find an edge as we approach the midpoint of the season. Perhaps the Vikings could find themselves not only freeing up cap space, but with a higher end draft pick as well.

Josh Frey is a Class of 2020 graduate of The College of Idaho with a bachelor’s degree in Creative Writing as well as minors in History, Human Biology, and Journalism. When he’s not writing about the NFL, Josh enjoys marathon training, playing video games, or rooting for the Milwaukee Brewers and Bucks. For more of his takes, NFL and otherwise, check out his Twitter account: @Freyed_Chicken.