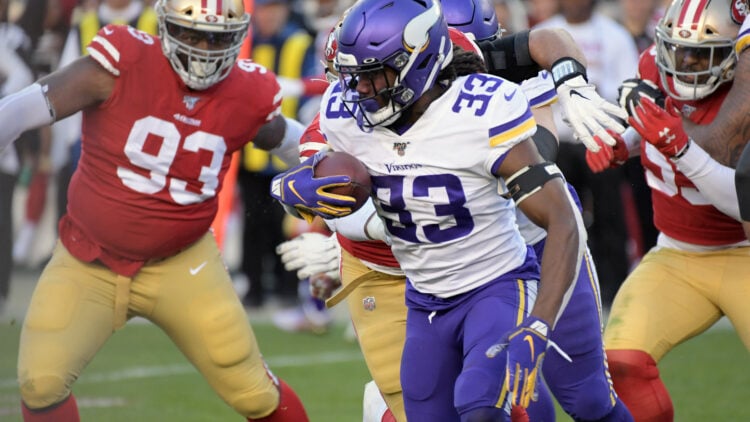 The Minnesota Vikings star running back Dalvin Cook will be switching to number four this season for the purple and gold. That has been known for a while now. What was less certain was what his overall would be in the upcoming Madden 23 release. It’s no longer a secret.

As ratings reveal week rolls on for Madden, Dalvin Cook saw his 94 overall show up on the list. That number places the Minnesota Vikings ball carrier 5th overall behind the likes of Derrick Henry, Nick Chubb, Christian McCaffrey, and Jonathan Taylor. Despite the overall not having him atop the list, Cook fares well in some key attributes.

Cook’s 94 rating assigned to his juke move is the highest in the game. It’s more than a fair assessment given the number of times Cook can evade defenders with them left tripping over themselves behind him. His 93 rating assigned to tackle-breaking ability is also noteworthy as he checks in 4th with that tally.

This isn’t just the Dalvin Cook show when it comes to chart-topping running backs, however. Teammate Kene Nwangwu has a 94 rating assigned to speed, putting him behind only Raheem Mostert for the fastest at the position across the entire game.

It’s not at all a surprise that Minnesota would rank high when it comes to the running back room. Cook has long been among the premier backs in the league, and the only thing that’s ever been able to slow him down is a clean bill of health. When needing someone to step up, Alexander Mattison has filled in admirably, and even Latavius Murray before that. The Vikings selected Nwangwu last season and now have added more talent in the form of Ty Chandler.

How these ratings shift for Cook over the course of the season will be interesting. New head coach Kevin O’Connell may opt to give Cook a bigger role in the passing game, allowing him to be great with his ability to evade defenders.

Check back for more Madden 23 news as ratings-reveal week rolls on.

What will TikTok become: trends 2022

What are the best things to do in Lyon?

NFC Clears Out for Vikings during Bye Week