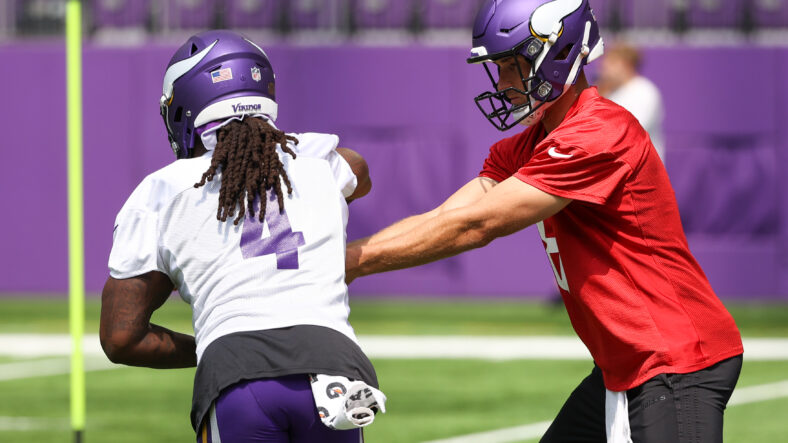 Dalvin Cook ranks second in the NFL per yards from scrimmage since the start of 2019, behind only Derrick Henry. And if all goes according to plan, his output, coupled with the production of his quarterback, the Minnesota Vikings offense can hit a “next level” in 2022.

The Vikings changed leadership personalities six months ago, passing the torch from Rick Spielman and Mike Zimmer to Kwesi Adofo-Mensah and Kevin O’Connell. Swapping a defense-always and run-first mindset in place since 2014, Minnesota transitions into a balanced, lean-more-on-passing attack with O’Connell running the show.

And Cook has a front-row seat to the progress at Vikings training camp. Kirk Cousins enters Year 11 as a pro and eighth season as an unabashed starting quarterback.

Cook joined the Rich Eisen show last week and explained about his QB1, “I’ve seen [Cousins] grow every year, but you see how comfortable he is with [Kevin O’Connell] from day one.”

Cousins and O’Connell were coworkers with the Washington Commanders during the 2017 season. Cousins was a third-year starter, and O’Connell was the quarterbacks coach.

Cook continued, “We needed that for our guy back there because Kirk can sling that rock. He can take us where we want to go, and we firmly believe that as a group and as a team. So having [Kevin O’Connell] come in and be that security blanket to help take us to the next level, I think that’s going to be good for Kirk and our team.”

Moreover, O’Connell doesn’t need to do much to “unlock” Cousins. In 2021, Cousins finished the season with a 33-TD to 7-INT split — the same statistics produced by Brett Favre for the Vikings in 2009. And Cousins’ impressive statsheet occurred with virtually no “garbage time,” a two-word noun and adjective erroneously used to skewer the quarterback by deranged thinkers. Minnesota played in 14 games decided by eight or fewer points last year — an NFL record. Garbage time wasn’t a thing.

Tweaks can be made to the offense, though. The Vikings 2021 offense was an odd beast, ranking tops in the business for 15+ yard offensive gains, best in the NFL via fewest turnovers — but third-worst in drives that resulted in three-and-outs. Too, Minnesota’s pass protection was familiarly underwhelming, ranking sixth-worst leaguewide per Pro Football Focus.

Overall, the next level chatter is why general manager Kwesi Adofo-Mensah re-upped with Cousins. When the next executive rolled into Minneapolis, he easily could’ve made a case to trade the expensive passer but chose to extend Cousins by an extra year, adhering him to the roster through the end of 2023.

Early on, according to Cook, the plan doesn’t seem too silly.

Avalara Set to be Acquired by Vista Equity Partners for $8.4 Billion

Explained: What to Expect against the Cardinals