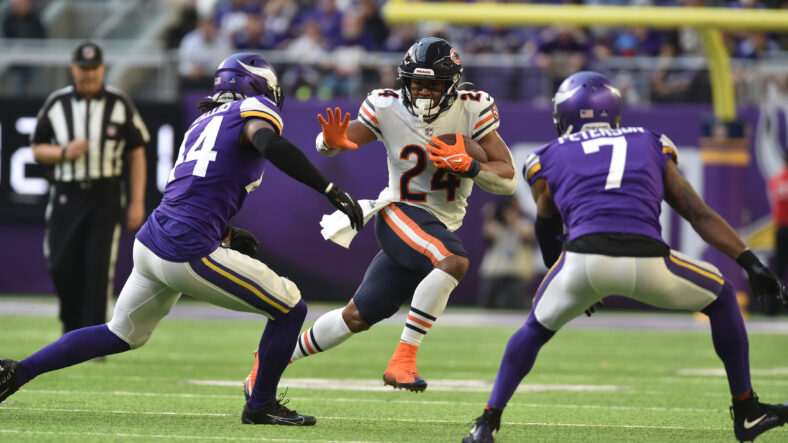 We’re six weeks into the 2022 season, so we’re able to start seeing some trends emerge. One of these trends is that the Vikings are giving up a lot of yards through the air. Minnesota has allowed 1632 air yards through 6 games, the third most in the NFL. It works out to an average of 272 passing yards against per game. Why has the pass coverage been so poor for the Vikings?

Truth be told, that’s a complex answer that goes beyond the scope of this piece. That being said, we might start with a quick look at the team’s top 3 corners to get a sense of how they’ve been playing (shout out to PFR for providing some excellent stats).

The team’s main 3 corners have been Patrick Peterson, Cameron Dantzler, and Chandon Sullivan. Sullivan has been the slot corner, which is essentially a starting position in today’s NFL.

Of the 3, there’s good reason to believe Peterson has been the best. The veteran has been targeted 35 times and only allowed 17 completions, meaning opposing QBs only complete 48.6% of their passes against him. He hasn’t allowed a touchdown and he’s holding quarterbacks to a 46.7 QB rating.

Meanwhile, Dantzler has shown some really good things. Of course, we think of the game-sealing strip on Ihmir Smith-Marsette, but he has done plenty of things well. QBs have completed 77.4% of their passes into his coverage, but he’s holding WRs to just 7 yards per completion, the lowest of Minnesota’s top 3 corners. Seeing Dantzler contest more catches would certainly allow the Vikings pass coverage to take a step forward. Like Peterson, he hasn’t allowed a TD.

Sullivan has had a rougher start to the year. 80.8% of the passes into his coverage have been completed; the average catch goes for 12 yards, an especially notable number since he’s the slot corner. Quarterbacks have a 119.7 QB rating when targeting Sullivan. Put simply, it has been a rough start to the year for him.

The PFF grades mostly reinforce the sense we get from the PFR stats. Peterson is 18th overall, Dantlzer is 31st, and Sullivan is 90th. Part of the issue is that Minnesota doesn’t currently have a great replacement for Sullivan. Peterson and Dantzler are almost exclusively outside corners. Asking Akayleb Evans or Kris Boyd to take on starting slot responsibilities seems misguided.

The lone remaining option would be to see if a healthy Andrew Booth Jr. could take the job. Given his start to the year, Booth is unlikely to climb into the CB3 role in Minnesota.

Seeing the defensive front continue to generate a ton of pressure will make life considerably easier for the corners. When Danielle Hunter and Za’Darius Smith are on, the secondary won’t have to cover for as along. Don’t forget, though, that the 6 sacks in Week 6 didn’t nullify passing success for the Dolphins. Tyreek Hill went for 177 yards and Jaylen Waddle went for 129 yards.

The solution, then, isn’t as simple as merely pressuring the QB more (though that is an important part of the equation). The team needs Peterson to continue his strong play, Dantzler to keep improving, and to generate some competition for slot duties.

Packers Nation Appears to Be Turning on Aaron Rodgers