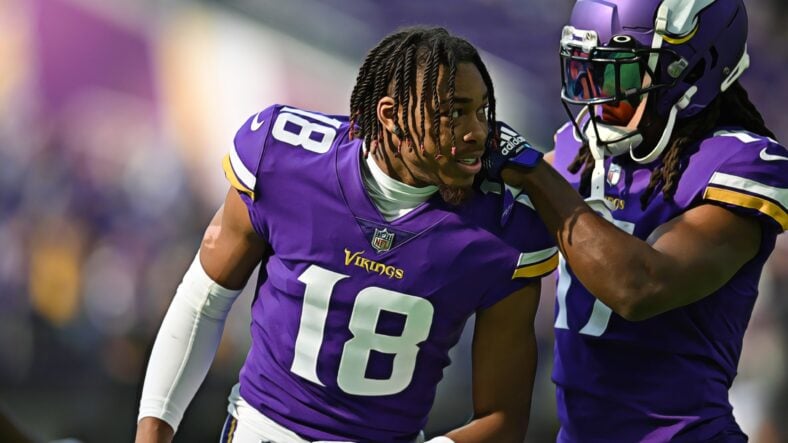 We finally got our acts together this past weekend. After three consecutive weeks of below-.500 picks, Week 5 was the week to finally get back on track. We went 5-1-1 and snuck back to an even .500 mark, and now, Week 6 brings an opportunity to build on that hot streak.

There are seven new picks for this weekend down below, including an analysis of whether or not there should be any concern for the Vikings in Miami. Before we get into the Week 6 NFL picks, though, here’s how all the picks from last weekend did:

For the first time since being drafted by the Bengals in 2020, Joe Burrow returns to the state of Louisiana where he led one of the most dangerous offenses in college football history at LSU and won a national championship.

So far in 2022, that Bengals offense has not nearly resembled the 2019 LSU team, ranking 20th in total yards and tied for 16th in points scored. Meanwhile, the Saints offense has found a nice rhythm with Andy Dalton and Taysom Hill switching on and off at QB. New Orleans will ruin Burrow’s homecoming party and sneak out a win against Cincinnati.

There’s a couple things to be nervous about if you’re a Vikings fan. First and foremost, backup QBs versus the Vikings always seem to have outstanding games for whatever reason, and Skylar Thompson is making his first career NFL start in place of Tua Tagovailoa and Teddy Bridgewater.

Additionally, the Dolphins employ two of the fastest receivers in the NFL, and they could use their elusiveness to draw a couple DPIs against the Vikings secondary. Between these two things, there’s a chance that the Dolphins keep this game close for much of the afternoon.

That said, Captain Kirk Cousins has done the Vikings well in clutch time this year, and I expect he’ll continue to do so in Miami. Keep an eye on Dalvin Cook for a big day too, playing in his hometown of Miami for the first time in his NFL career.

You won’t find two teams hotter than the Buffalo Bills and Kansas City Chiefs right now, especially on the offensive side of the ball. Through five weeks, these are the top-two scoring offenses in the entire NFL right now, each averaging north of 30 points per game.

However, the Bills also boast the best scoring defense in the NFL, allowing just 12.2 points per game. Surely, Patrick Mahomes and Andy Reid will find a way to score at least two touchdowns on Sunday, but can they turn Buffalo’s defense on its head and keep up with their offense? I’m not so sure about that.

Remember the good ole days when the NFC East was the little brother of the NFL? Those days appear to be over as three teams come into Week 5 with records of 4-1 or better. Two of them matchup on Sunday night as the Dallas Cowboys head to Philadelphia to take on the Eagles.

The story for the Dallas Cowboys has been the fact that they are now 4-0 with Cooper Rush as a starting QB this season. However, after a couple very nice games from the backup QB, Rush has come down to earth a little in recent weeks. The Cowboys defense has carried the way, though, led by Micah Parsons. Through five games, the Cowboys have a league-leading 73 pressures and have piled up 20 sacks.

Of course, Philadelphia has an equally powerful group on the defensive side of the ball, ranking among the top five in total yards allowed. Because of these overwhelming defensive units, this should be a close, low-scoring affair.

If you watched any of last Thursday’s game between the Broncos and Colts, firstly, I’m sorry. Secondly, how can you possibly bring yourself to pick the Broncos in any game, let alone against a potential playoff team like the Chargers?

The Broncos have a season-high of 23 points in a single game, and they’ve already scored fewer than 15 points twice. However, Denver’s defensive group has been at least decent considering how putridly the offense has performed.

Due to that, and some troubles along LA’s offensive line, I think this will be another low-scoring stalemate, but LA will at least score a couple touchdowns to pull away.

Josh Frey is a Class of 2020 graduate of The College of Idaho with a bachelor’s degree in Creative Writing as well as minors in History, Human Biology, and Journalism. When he’s not writing about the NFL, Josh enjoys marathon training, playing video games, or rooting for the Milwaukee Brewers and Bucks. For more of his takes, NFL and otherwise, check out his Twitter account: @Freyed_Chicken

Statutory Declarations when Appointing UK Administrators – what happens if the remote-swear guidance is not followed?

The Vikings Top Defensive Performers at Commanders, per PFF

Week 3: Lions at Vikings, According to Madden Simulation