The bulls are not giving up, with all of the top 10 coins being in the green zone. 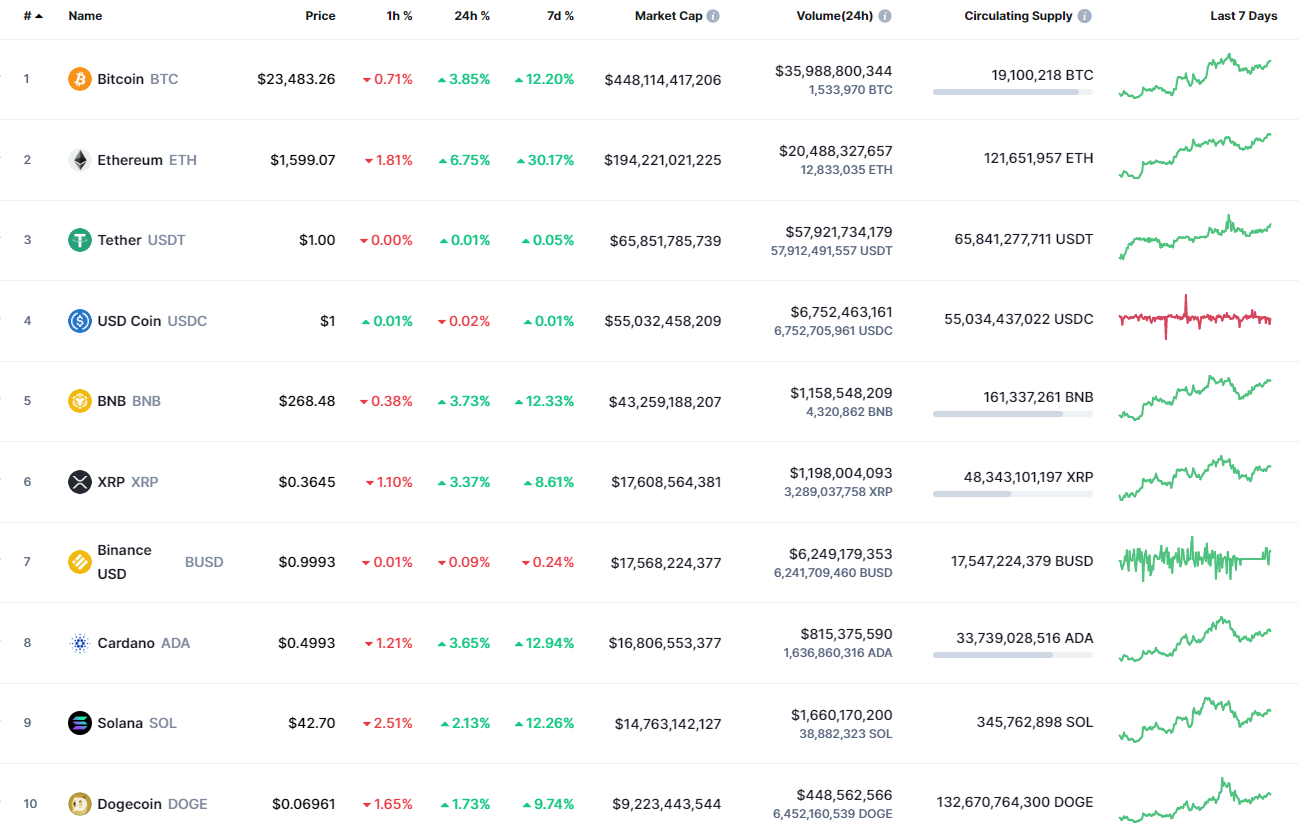 Bitcoin (BTC) has bounced off the $23,000 mark once again, which means that bulls are ready to hold this level. Currently, one should pay close attention to the recently formed local resistance level at $23,800.

If the daily candle closes near it, there is a high chance of seeing strong growth soon.

Ethereum (ETH) has gained more than Bitcoin (BTC). The cryptocurrency has spiked by 7.69%.

Ethereum (ETH) is fighting for the vital $1,600 level. Despite having low buying volume, bulls are not going to give up, accumulating energy for another upward move. If the candle fixes above $1,600, the mid-term bull run might continue. Such a scenario is relevant until the end of the month.

XRP has underperformed the abovementioned coins, increasing by 4% over the past 24 hours.

Unlike other cryptocurrencies, XRP has not accumulated enough power for further moves. Currently, the altcoin is trading in the narrow range between the support at $0.3434 and the resistance at $0.3870. The continued rise can happen only if the rate approaches the $0.38 mark and fixes near it.

Binance Coin (BNB) has followed the rise of Bitcoin (BTC), growing by almost 5%.

Binance Coin (BNB) has continued the rise after the false breakout of the $265 mark. At the moment, the price is on the way to $270 on the daily chart. If buyers can hold the gained initiative, one can expect a rise above the local resistance level at $273 within the next few days.

DOGE is the worst-performing coin from the list, rising by a mere 2.30%.

DOGE is trading similar to XRP as the meme coin keeps trading sideways with neither bullish nor bearish signals. The upward move is possible if buyers can get back the price above the $0.07 zone on the daily chart.

SHIB is looking weaker than other coins as the price has made a false breakout of the $0.000012 mark. In this case, the more likely scenario is a further drop to the nearest level at $0.000011. Thus, the volume has declined, confirming the absence of buyers.

Trader Joe’s recalls snickerdoodles because of plastic in product

Crypto Fear and Greed Index Might Be Hinting at Another Plunge