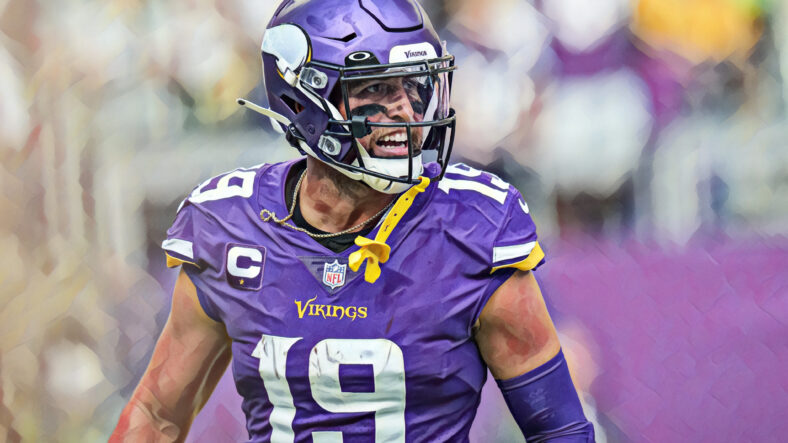 The Minnesota Vikings head back home after a tough loss at the hands of the Philadelphia Eagles on Monday Night Football. With that game now behind us, the Vikings are looking to get back on track this week at home. Here are some bold predictions for the Lions/Vikings game this week.

So far into the 2022 NFL season, the Vikings have not been able to unlock Adam Thielen in key moments. Through two weeks, Thielen has just 7 receptions and 88 yards with zero touchdowns.

Week 1’s disappearance wasn’t necessarily a huge deal because Justin Jefferson could get whatever he wanted against Green Bay’s secondary. Week 2 was a different story though as Jefferson struggled against Philly’s secondary, and Thielen still had zero targets through three quarters.

This week, the Vikings will finally get their offense on the right track against Detroit. Part of that will include getting Thielen involved in the red zone; an area of the field that he has owned throughout the past few seasons. Thielen catches two touchdown passes on Sunday.

The Vikings may be a work-in-progress on the offensive side of the ball, but the defense is completely under construction after that performance against the Philadelphia Eagles. The second half was certainly better than the debacle that was the first half, but there are a lot of things to work on.

On top of that, Harrison Smith has not practiced yet this week because of a concussion, and it doesn’t seem likely at this point that he will play.

The Detroit Lions have been a high-flying offense early in the year, and I already stated that the Vikings offense is going to bounce back this week. Because of that, it seems very feasible that there will be more than 60 points combined in this game.

Danielle Hunter and Za’Darius Smith Each Get a Sack

The Vikings defense may have a tough time in the secondary considering their injuries, but this feels like a game where the stars come out to play all over the field.

Detroit has some of the best offensive tackles in the NFL, but Danielle Hunter and Za’Darius Smith will make sure their impact is felt. Each of them will record a sack en route to the Vikings win.

How to Use Business Transformation to create a better ‘People Culture’

Burberry CFO to step down next year

Vikings Players with Most to Prove in 2022