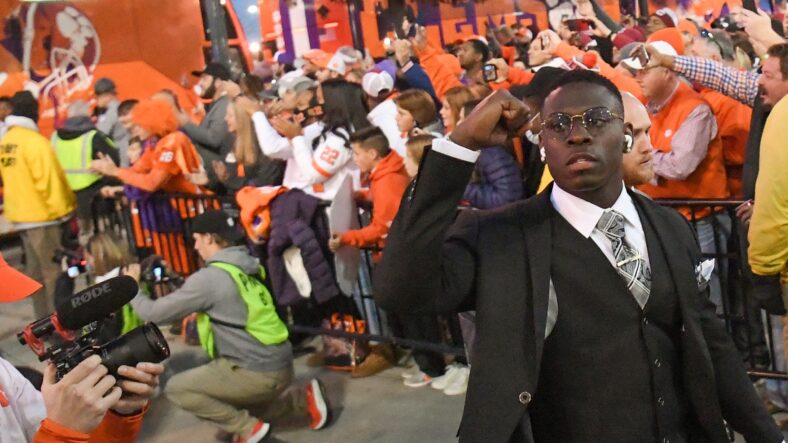 Forget Kirk Cousins, Garrett Bradbury, or any other controversial Minnesota Vikings player. It’s a rookie who might disappoint fans in 2022, according to Maurice Moton of Bleacher Report.

Moton nominated a player from each team on Tuesday who could let fans down this season, and for the Vikings, that man is Andrew Booth, a rookie from Clemson.

Booth was drafted in the 2nd Round of the 2022 NFL Draft by Vikings general manager Kwesi Adofo-Mensah, a pick that spawned excitement among Vikings loyalists as Booth was forecasted as a 1st-Rounder in several credible mock drafts. Booth dealt with some injuries leading up to the draft, so his stock was dampened for a handful of teams.

The Clemson alumnus didn’t participate in Vikings mandatory minicamp a couple of weeks ago, but head coach Kevin O’Connell affirmed Booth would be ready for training camp in July.

Per Bleacher Report, enthusiasm isn’t too high for Booth because of the aforementioned injuries and the Vikings crowded house in the CB room. Moton wrote, “No one should be surprised if Booth comes off the bench to start the season and has to wait his turn behind Dantzler and a solid veteran in Peterson. In the event that one of the two returning starters goes down, Booth should be the primary backup to fill in on the boundary, but the coaching staff may ease him into the rotation if he’s limited through training camp.”

So, the disconnect here seems to be Moton’s impression that Booth should start immediately in an ideal situation. However, because the Vikings employ Dantzler and Peterson, two starting commodities, Booth risks inhabiting “backup status” during his rookie season. And, evidently, that would classify as a mini-disappointment by Bleacher Report standards.

Vikings fans predominantly care about Booth’s long-term trajectory. If he doesn’t put a firm thumbprint on the 2022 season because Minnesota has “too many” CB mouths to feed, few will care — so long as Booth is ready for the bright lights when Peterson eventually moves on.

And the Vikings have a magnificent recent track record for 2nd-Round draftees. From Eric Kendricks, Dalvin Cook, Brian O’Neill, Irv Smith Jr. to Ezra Cleveland, the Vikings 2nd-Round spoils from 2015 to present are rather impressive. Adofo-Mensah also drafted offensive lineman Ed Ingram in Round 2 this year, and Vikings fans will follow Booth and Ingram studiously to determine if the trend continues.

Vikings training camp begins in about five weeks, where Booth will battle for a starting job.

Vikings Face Own Blueprint in Week 1

The Perks of Vikings 2022 Schedule Cannot Be Overstated

Would a Vikings Win in Buffalo Solidify Legitimacy?

4 Ways Vikings Offense Can Improve from 2021