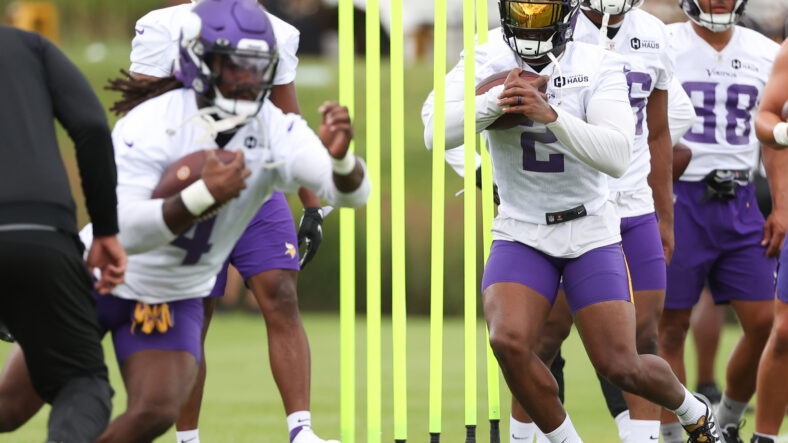 Bleacher Report has hopped on the trendy train involving roster Vikings roster cuts after it published an article on Wednesday recommending subtractions from each NFL roster.

The NFL mandates that all teams reduce to 53 players by August 30th, meaning 38% of players won’t make regular season rosters between now and then.

For the Vikings, Bleacher Report’s Ian Wharton nominated running back Alexander Mattison as a prominent roster casualty. Wharton explained the suggestion, “Among all the running backs on the roster, Mattison sticks out like a sore thumb. The majority of the Vikings’ rushers offer a variety of speed and athleticism, while Mattison utilizes his power and strength more than anything.”

Wharton is on to something about the Vikings depth at running back. It’s just unclear if too much is enough for Minnesota. Mattison is seemingly guaranteed to start a few games per season with teammate Dalvin Cook’s injury history, and when he fills in, he plays quite well.

Now, though, the Vikings employ Kene Nwangwu and Ty Chandler. Both men appear to have a grasp on RB2 duties if called upon. And that has led some onlookers of the Vikings to speculate about Mattison’s relative expandability.

Wharton elaborated, “It’s still possible that the Vikings’ new coaching staff could figure out a good role for Mattison. But Minnesota moving on from its No. 2 running back before the start of the upcoming regular season might not be as shocking as some think it would be.”

Some have also spitballed Mattison as a trade candidate. Indeed, Mattison is only 24 years old and should have several productive seasons afoot, but would a team really trade noteworthy draft capital for a running back? Probably not. A Mattison trade might fetch a 6th-Rounder from an RB-needy team.

So, per the theme of the Bleacher Report piece, the question is: How many RBs and FBs do the Vikings retain on the 53-man roster? While not unheard of, keeping five backs — Dalvin Cook, Alexander Mattison, Kene Nwangwu, Ty Chandler, C.J. Ham — could be perceived as overkill.

Meanwhile, there is next to no chance of Cook, Nwangwu, or Ham getting released at the end of the month. That leaves Chandler, a rookie who just dazzled in the first preseason game, and Mattison, who is actually younger than Chandler. Before his preseason theatrics, Chandler could’ve realistically landed a practice-squad assignment, but now that seems silly.

The next step is to monitor the Vikings 53-man roster revelation on August 30th. It will reveal the verdict — five RBs and FBs on the depth chart or a free-agent Alexander Mattison.

Guess Who’s Back, Back Again – at Practice.

Will NFL Pundits Admit They Were Wrong about Kirk Cousins?