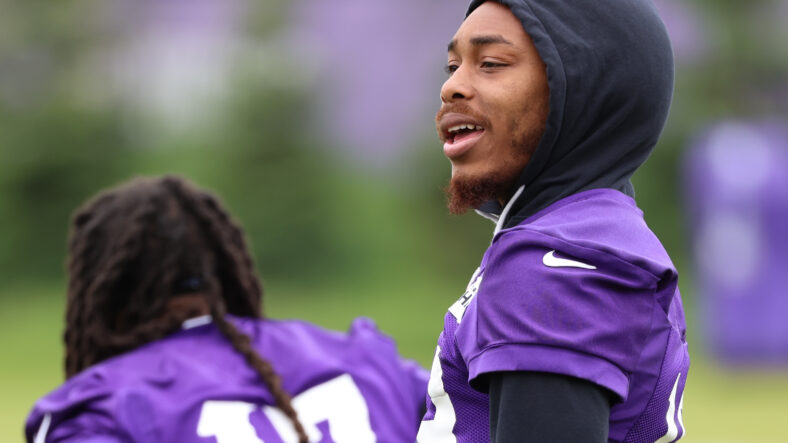 Minnesota Vikings wideout Justin Jefferson envisions a Cooper Kupp-like role for his talents inside the new-look offense this September.

Kupp recorded 1,947 receiving yards in 2021 with Kevin O’Connell as the Los Angeles Rams offensive coordinator. O’Connell is now the head coach of the Vikings.

Jefferson, who tallied 1,616 receiving yards in his sophomore season, said about the Kupp comparison to The Ringer in June, “Just seeing what Cooper Kupp did last year, that gives me so much hope, gives me so much excitement to see what I can do in the same position that he was. Him being so close to reaching the record, him getting that triple crown, all those things that he accomplished are up in the air for me right now, so we just gotta buy into the system, learn the plays and we all have confidence that KO is going to distribute the ball to different people throughout the offense.”

And that plan for Jefferson is good enough for some to forecast a gigantic season in 2022. Jefferson is already slated as a Top 10 PPR fantasy football selection this year, but other NFL brains believe the LSU alumnus could shatter NFL records.

The BetQL Network, a partner of BetMGM, has a mammoth prediction for Jefferson — breaking the league’s single-season receiving yards record.

Describing Jefferson with the capability of undertaking an “all-time great season,” Dan Karpuc, managing editor of BetQL, predicted on Friday, “I’m going to call it now: Jefferson will break Calvin Johnson’s single-season record of 1,964 receiving yards with over 2,000 and will also score over 24 receiving touchdowns, breaking Jerry Rice’s all-time mark of 23. Yes, that’s bold. But he’s that talented.”

Truth be told, one could not possibly prognosticate something bigger for Jefferson than Karpuc’s theory. It’s as bold as it gets for a wide receiver, banking on immediate chemistry between O’Connell, his players, and the Vikings new scheme.

Jefferson already owns the distinction of most receiving yards in NFL history through a player’s first two seasons (3,016). Notching over 2,000 yards and 24+ touchdowns is downright gaudy. While possible, Jefferson would need well over 200+ targets in Minnesota’s offense — more than Kupp with the Rams last year — and a clean bill of health for 17 games.

Jefferson’s proposed statline would put anything Randy Moss, Jerry Rice, or Larry Fitzgerald did in a single season to total shame. The saving grace for Karpuc’s prediction? Each year, the NFL develops into a pass-happier sport, making Jefferson’s wherewithal to breach such records a little more feasible.

Of course, on the whole, Karpuc’s lofty projection is unlikely to come true. But at least the gambling community has a massive season for the 23-year-old in its purview. Stefon Diggs, whom the Vikings sent to Buffalo in exchange for the draft pick that landed Jefferson, isn’t netting this attention. Ja’Marr Chase, Jefferson’s college teammate and first-year NFL phenom, isn’t turning heads for Jerry Rice-like projections.

Overall, the expectation for Jefferson is humongous. He can start to chip away at NFL records on September 11th when the Vikings host the Green Bay Packers in Week 1.

Will I Receive Alimony After my New Jersey Divorce?

The Vikings Top Players from Best to Worst: After Week 14

The Vikings 2022 Defense by the Numbers: After Week 11

How Would the Vikings Have Fared Against the Colts in Super Bowl 44?