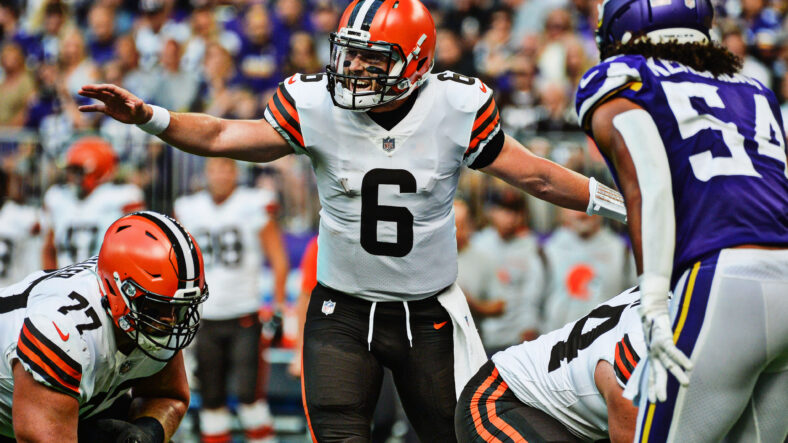 After 3.5 months of speculation, Baker Mayfield was traded to the Carolina Panthers on Wednesday.

Mayfield previously quarterbacked the Cleveland Browns for four seasons, guiding the franchise to its first playoff win in 25+ years in 2020. But Cleveland took a sharp foundational turn in March, trading a king’s ransom for the embattled Deshaun Watson, who is facing a suspension in 2022 for sexual misconduct.

In the Panthers deal, Mayfield was reportedly exchanged for a 2024 conditional 5th-round draft pick — a teensy package for a QB1 coveted as little as 18 months ago.

But Mayfield will get a fresh start, which is what the Oklahoma alumnus desired after his previous employer wiggled into the Watson sweepstakes.

Mayfield was around the league’s seventh-worst quarterback in 2022, playing most of the season through injury. The iron-man effort did not advance his career, at least not yet.

Suddenly, the Panthers QB room is filled to the brim with options. While Mayfield is expected to start, these players also exist on Carolina’s depth chart:

Few will object to Darnold’s banishment to QB2, but some Panthers faithful had high hopes for the rookie Corral, who possessed an outside chance to start this season if he could knock off Darnold in training camp or preseason.

Financially, Cleveland will pay Mayfield $10.5 million this season, trimming over $8 million in cash and salary-cap space for this summer and beyond. And the Browns already lead the NFL in most available cap space.

Since 2018, Mayfield owns a 92-touchdown to 56-interception split, a commendable mark for a young quarterback. The 92 touchdowns rank 12th in the NFL over the last four years.

If Mayfield is the quarterback beyond this season, the Vikings will face him in 2023 at Bank of America Stadium in Charlotte.

Revive Superfoods no longer has Tara as a listed ingredient – what happened in the last 24 hours?

The Packers Apparently Tried to Trade for Everybody

Keenan McCardell May Stay Put in 2023 after All

The Vikings 2022 Offense by the Numbers: After Week 6

The Vikings Have a Simple Motto for the 2022 Season