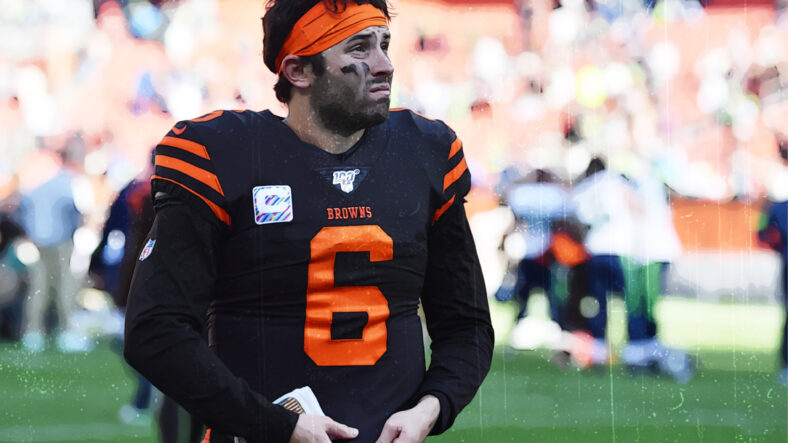 The Vikings already employ Kirk Cousins, who earns $35 million per season, but Graziano maintained Mayfield could fit in Minnesota. He defended the idea, “They’re set this season with Kirk Cousins but could move on from him after the year. This is an example of a place where Mayfield or Garoppolo wouldn’t start right away but could position himself as the team’s starter in 2023, the way Winston did with the Saints in 2020.”

Unsurprisingly, however, the Mayfield-to-Minnesota trade talk died down, mainly because any team can simply sign the 27-year-old on the open market next March. Unless a team needs a quarterback now — the Vikings do not — it can avoid bartering draft capital this summer and snag Mayfield in free agency next spring. And his pricetag shouldn’t be too gaudy.

So, as the sweven of Mayfield playing for the Vikings diminishes, the theory of Cleveland Browns passer landing with the Seattle Seahawks spikes. Seattle is one of the few teams in the league this offseason with a “meh” plan at quarterback. The Seahawks sent Russell Wilson to Denver for king’s mini-ransom, receiving Drew Lock in the deal, who may or may not be a realistic QB1.

Folks already know Mayfield can start in the NFL — at varying levels of success — so a marriage in Seattle makes sense. Last week, Josina Anderson reported on Mayfield, “The Seattle Seahawks still have a high level of interest in acquiring quarterback Baker Mayfield and are open to contractually extending him, per league source.”

A writer for Who Dat Dish, Michael Balko, tweeted on Sunday, “I’m hearing that the Seahawks and Browns are nearing a trade agreement that would send QB Baker Mayfield to Seattle.”

Additionally, Aaron Wilson from Pro Football Network seemed to corroborate the Mayfield-Seahawks fodder, too, “The interest between the Seahawks and Mayfield is mutual, according to league sources. The Seahawks’ depth chart at quarterback dictates this situation as much as anything. The Seahawks have Drew Lock and Geno Smith currently competing for the starting job. They have $16.3 million in salary cap space available, so they would need to make some adjustments to absorb Mayfield’s current salary or extend him.”

Mayfield is in one of the strangest spots in recent memory for a quarterback. He led the Browns to their first playoff triumph in 25+ years in 2020. NFL brains believed Cleveland was set at quarterback for years as the team invested the first overall pick in Mayfield during the 2018 NFL Draft.

Fast forward to an offseason later, and Mayfield is an NFL refugee, at least until the Seahawks culminate the trade. Mayfield played injured in 2021, hurting his long-term stock as a quarterback and sinking the Browns season, one that had lofty expectations at this time last year. There is precedent for players navigating injuries — Brett Favre can tell you all about it — but those circumstances are generally one-game or two-game situations, like Michael Jordan’s stomach-virus game 25 years ago. Seldom can athletes thrive while injured for months at a time.

The takeaway? Well, Mayfield was probably never going to join the Vikings in the first place, but the Graziano article assuredly stirred the pot. It’s considerably more realistic that he joins the Seahawks.

The Vikings play the Seahawks again in 2024 at Lumen Field.

The Vikings Contingency Plan at Center