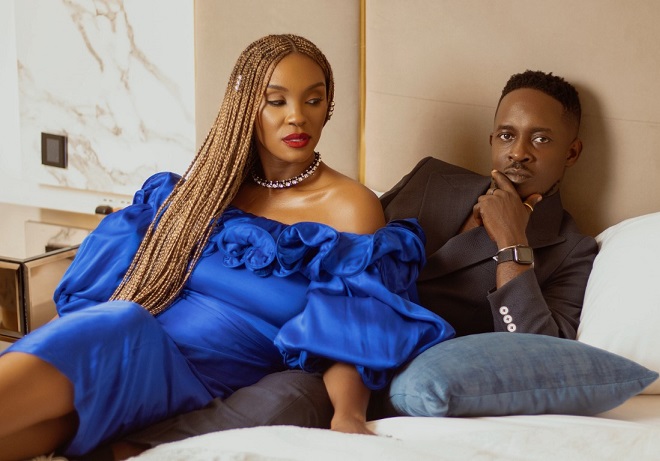 M.I Abaga got married to the love of his life, Eniola Mafe, this past weekend.

The newly-wedded husband and wife, sat with the Editor of TheWill Downtown magazine to share their beautiful love story. Editor of the magazine, Onah Nwachukwu, says about the couple,

Their swoon-worthy love story is technology enabled, as their meeting was on social media after a mutual friend introduced them. From spending hours talking, they grew a friendship that, according to Eniola’s side of the story, she built to become love. What’s most captivating about their story is that they understood the importance of communication right from the start, so they talked about everything a couple, young or old intending to be together, ought to talk about. Not many people

More often than not, young couples, especially, are blinded by the mirage of the excitement of a relationship and leave out the core of what a relationship is built upon; communication. So honest were their conversations that they immediately spotted their backgrounds and goals aligned, and within a few months, Jude knew he’d like her in his life for a long time. As he put it, “…I told her she’s the story I want to read more. I don’t know how the story is going to end, but I would like to read chapters 2, 3, or 4 and learn more about her.” I must confess that when I heard those words during the interview, I thought to myself, ‘those are such beautiful words’ then I remembered who was saying them, and it made perfect sense that he would know how to express himself to the woman he had fallen for. He is, after all, M.I.

As we wish them the best on their journey to forever, these lyrics from his hit song, One Naira, have certainly come alive: But what we have is so realistic, there’s no forming girl, no film tricks, I no go chop outside, no picnics… it don’t matter if I got ego, we got something we can build on, Lego…

See extracts from the interview below:

At what point did you know, hey, there’s something here, I think I’m falling in love?

M.I: Number one was when Audu told me about her; this is the phase of my life when I knew I needed to meet someone new. I went to her Instagram page and [made a gesture to suggest that he was in awe]. I think because, in the back of my mind, I had always thought, even as a child, that I’d love to marry a woman with an afro; I don’t know why; it was just this silly thing. So as soon as I saw her page, I was like, ‘get out of here’ [in excitement because she had an afro on].

That was my first thought. Then we followed each other and started talking. I think the first time we spoke, we spoke for like two hours on the phone. This was Christmas time, and I was at home with family—my cousins and everyone was around. They are the ones that started noticing that every day I was gisting with this person. Early on, because of the distance between us, she living in Geneva and I in Lagos, it allowed us to be very clear. If it wasn’t worth doing, there’s no point. To look at her from that perspective, I would say that our meeting was one of the most magical times of my life. Falling in love was magical because we spent hours talking about several things like stories, music, and so on.

Eniola: We would talk for hours, and people would be like, ‘what are you guys doing?’ If there was a camera, people would be solely disappointed with us. Sometimes we’d have music playing, and I’ll often dance (on camera). He indulges me in just being me. With women, we can sometimes look like we have it all together; it’s very hard to decipher where they actually need someone. It requires an inquisitive person who knows themselves and feels pretty confident in themselves to ask questions that have nothing to do with satisfying their ego. Sometimes
with these conversations when you first meet, you’re mining for information to tell you whether this person is worth your time or not. I knew I was in trouble; I don’t mean that in a bad way; I was like, ‘oh man, he got me.’

M.I: A lot of times, as men, you’re also not sure as you go through life. ‘Have I met the person?’ In my experience, you meet someone that you’re like, ‘this is the chance, this is the opportunity I need. I am now ready to put all my eggs in one basket. This is the basket.’ I told her she’s the story I want to read more. I don’t know how the story is going to end, but I would like to read chapters 2, 3, or 4 and learn more about her.

Eniola: Jude already talked about the opportunity to meet someone amazing. It kinda scared me a little bit, it scares anyone because you don’t want to mess it up, and I loved being friends with him. He was a fast friend in the sense that I wanted to tell him about my day and show him everything, and this is someone I met a couple of weeks ago. I was just wowed like I really want this person in my life and I hoped they would stay, not in any kind of romantic way, it was that I want to be around this person a lot, and I think he’s really great. Not him as M.I but as Jude was just such a joy. I liked myself around him, and this was over the phone. He’s helped me become a better daughter to my parents, a better sister, friend, and woman. You don’t know how this story ends, but that intentional incubation of a raising of love… You talk about meeting and falling in love; I don’t think I fell in love. I built love with this person. He’s also helped me to get to love myself. He mentioned ADHD, I also have ADHD, so we interact in ways that probably look a bit haphazard to other people, but it works for us.

To be cont’d here

477 Billion SHIB Acquired by Whales, Here’s What’s Behind It

Abby De La Rosa, who is expecting, reveals that Nick Cannon is the father of her third child