Experiential retail is more important than ever post-pandemic. Apple’s new store on Brompton Road in London’s Knightsbridge nails this with a store that is more interactive than ever before.

Whilst certainly aesthetic, Apple stores of the past have teetered on the edge of being too clinical for my tastes. This is not the case with the Brompton Road store.

The store environment is much warmer than its White City or Stratford outposts with bursts of colour coming from the foliage within the store, which draws inspiration from local flora.

Those visiting the store which opened this morning will immediately see 12 towering ficus trees that line the dramatic 7-metre floor-to-ceiling windows and entryway.

Casual seating places around the trees provide an informal place for shoppers to relax while the store also features its world-first eco flooring, made of plant-based bio resin, and a moss wall.

As one team member told me, “apparently they (Apple) spent two years planning this store and you can tell – no expense was spared.”

And in another first for the UK, the Knightsbridge flagship also features a dedicated Pickup area making it even more convenient for customers to collect products ordered online. 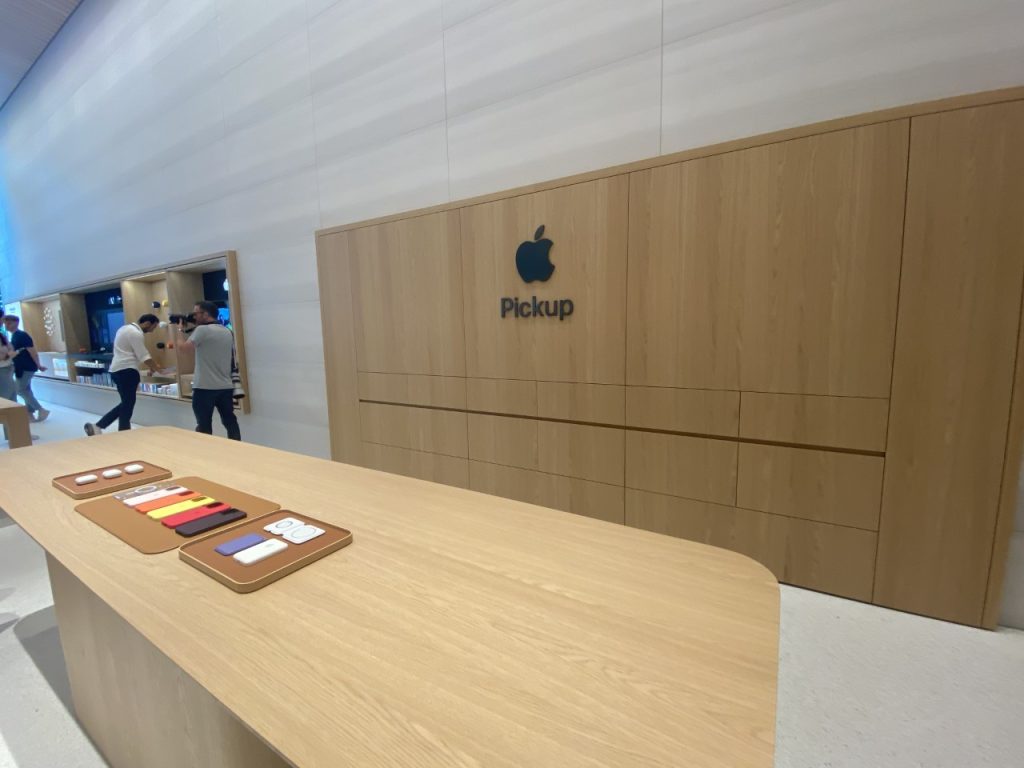 While this area of the store isn’t the most visually exciting, previously those in the UK wishing to pick up their online orders swiftly would often be forced to wait for a member of staff to free up. This new area eliminates that wait time significantly.

Apple has always been an industry innovator and as experiential retail continues to be an important part of bricks and mortar, the new store taps into the trend. 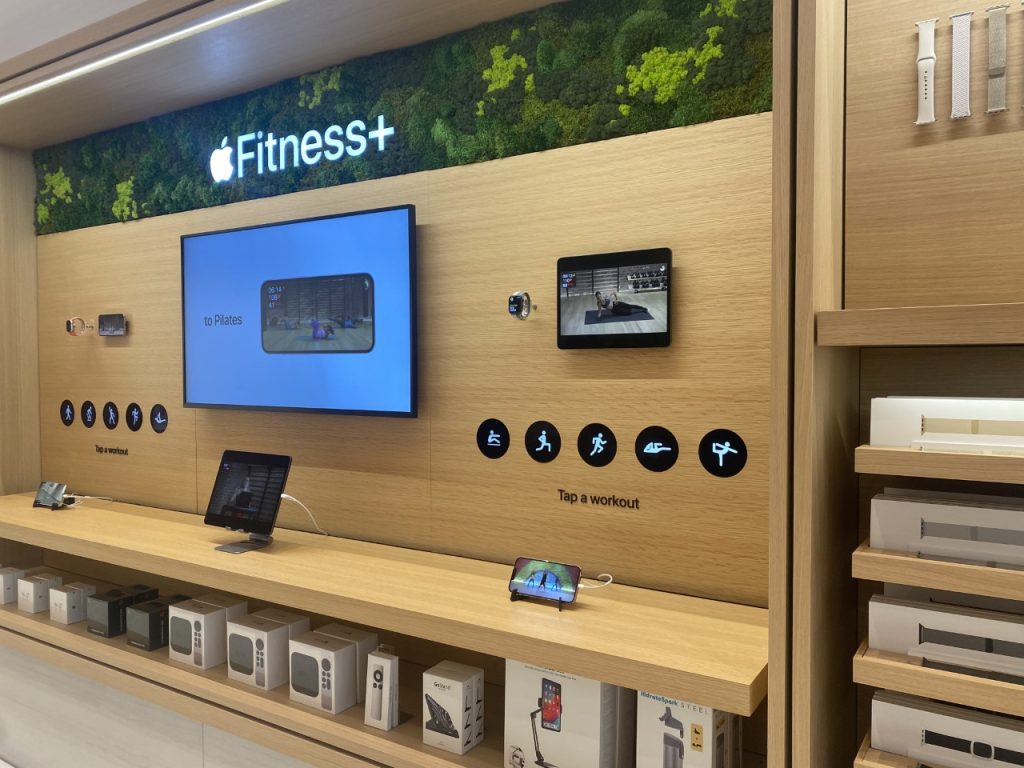 Unsurprising Apple’s experiences are very-much tech-led, as it shows shoppers what is possible through its connected technology.

In the Fitness+ area of the store, shoppers can see how to make the most out of Apple’s health and fitness offering though interactive touch panels.

There’s a similar interactive area, which shows off Apple’s prowess in music. Such interactive elements help the store feel more playful, rather than endless shelves of apple products on display.

It’s less about what Apple sells, and more what Apple can allow you to do.

The store also features the first look at an innovative augmented reality (AR) experience created for the Getty Museum, ‘United Visions’, designed around the works of London artist William Blake.

While those in the store will be encouraged the have a play there and then, the experience can be used in the comfort of your own home using the United Visions app.

The experience features a soundtrack Grammy Award-winning record producer Just Blaze and highlights how Apple is using AR, not just for virtual shopping experiences but also for art and entertainment.

The Brompton Road store is about more than just shopping, it’s designed to be a hub for creatives.

The giant forum (pictured below) features a mirrored ceiling over the seating area where ‘how to’ sessions take place. 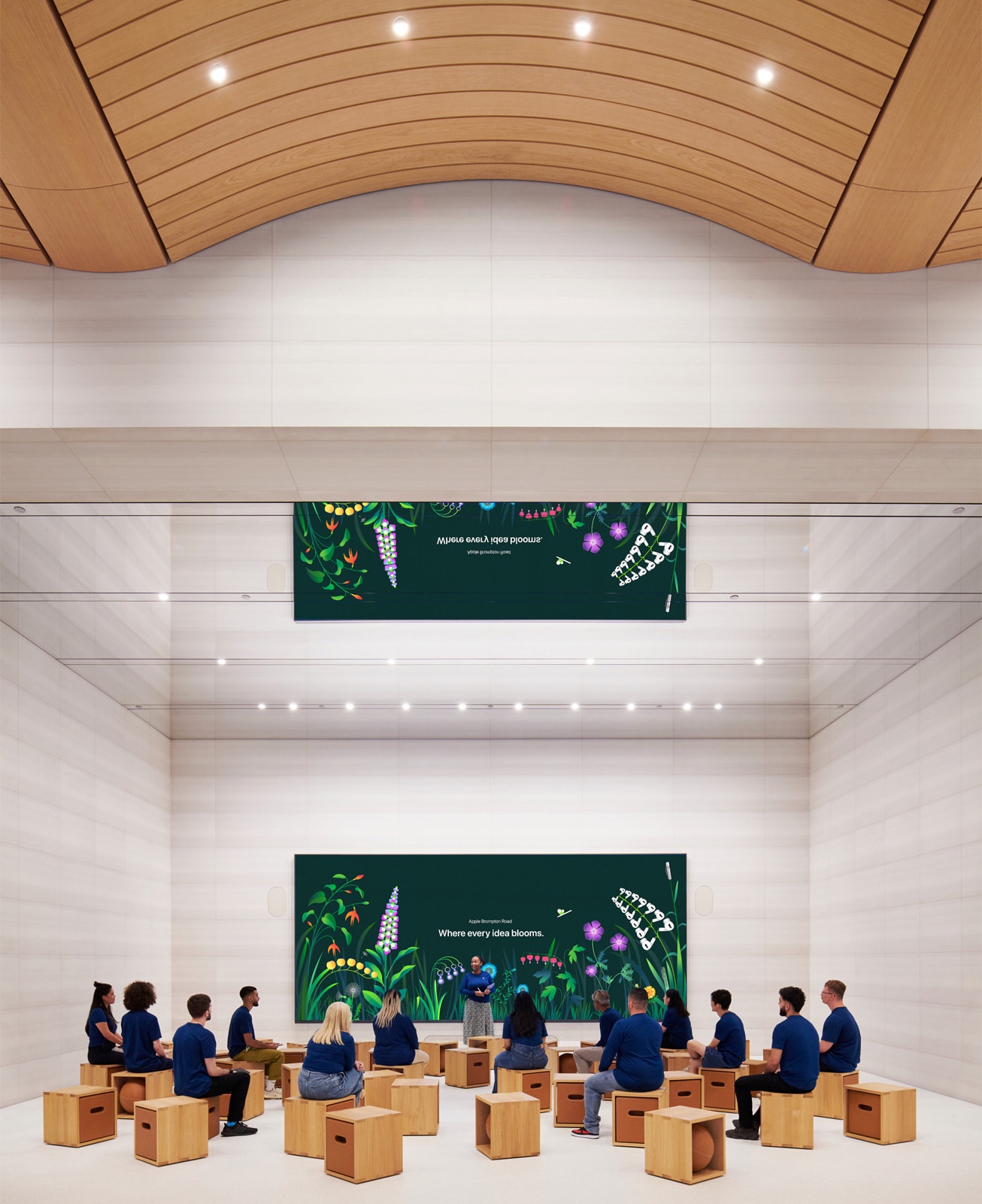 These sessions will include “inspirational and informative talks by thought leaders in the wellness space”, photography workshops, and music workshops in connection with Apple Music. All of this will help put Apple in the heart of London’s tech and music scene.

Top Reasons for Insurance to Deny Your Car Accident Claim

Asda teams up with Deliveroo to provide on-demand groceries

Tesco and Morrisons warn on ‘shrinkflation’