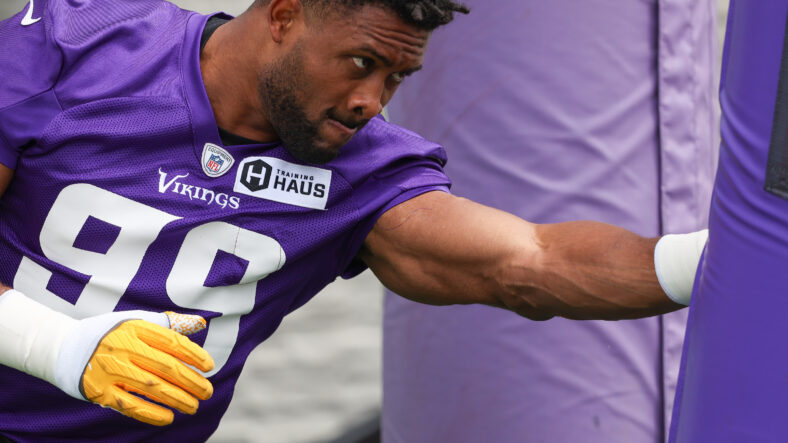 The defense of the Minnesota Vikings has been a disaster after the defensive masterpiece in the 2019 playoffs, which ended with two cold-blooded throws by Kirk Cousins in overtime to beat the Saints. The divisional round in San Francisco and the two seasons afterward were a mess in terms of defensive performance.

The two edge rushers were huge downgrades as well. Everson Griffen opted out of his contract and signed with the Cowboys. Danielle Hunter, meanwhile, missed the full season with a neck injury. Just like the cornerbacks, their replacements were not up for the task.

The Vikings’ defense ranked 27th in the last couple of seasons with 27.3 points allowed. The two units were also the worst since 2000 in terms of points giving up inside the last two minutes of either half.

Sam Monson from PFF dropped a bold prediction about the Vikings’ defense in 2022, and it is, indeed, bold.

Vikings Will Have a Top 10 Defense

Monson didn’t specify in which rankings the Vikings will be a top 10 unit, but he has an explanation for why it could happen, “Things went badly for the Vikings last season, but it’s easy to overlook 1) how beat up they were at key positions, and 2) the additions they’ve made this offseason.”

The Vikings made a lot of changes in the offseason. Za’Darius Smith, Harrison Phillips, Chandon Sullivan, and Jordan Hicks are all good veterans that can help any defense in the league. They are important reinforcements for a struggling unit. In addition to that, the Vikings added multiple young players to the mix when they drafted Lewis Cine and Andrew Booth with their first two picks, something that was important to Monson for the possible emergence of the defense, “The secondary was a weak area, but two top draft picks in Andrew Booth Jr. and Lewis Cine will provide reinforcements.”

Brian Asamoah and Akayleb Evans were picked in rounds three and four. They can provide valuable depth early in their careers.

Another change was from Zimmer’s 4-3 base defense to a 3-4 base defense, implemented by the new defensive coordinator and former Vic Fangio disciple, Ed Donatell.

Health was a problem for a Vikings team without much depth. Defensive stars Danielle Hunter, Anthony Barr, and Michael Pierce all missed big parts of the season. Additionally, Patrick Peterson, Eric Kendricks, and Harrison Smith missed a few games as well. The lack of depth can be explained by a low hit rate in recent drafts, despite a lot of picks.

Per Monson, the edge-rushing duo will make a huge difference. It’s arguably the most critical position on any defense, and the Vikings have a great tandem, “Danielle Hunter has now missed the majority of the past two seasons but is still just 27 years old, and the last time he was healthy he notched a career-high 88 pressures. Za’Darius Smith missed most of last season for Green Bay but tallied 144 pressures over the previous two seasons. They now feature as bookend pass rushers on the same defense.”

Both are All-Pro caliber players when they are fully healthy. Hunter played seven games in the last two seasons, and Smith just one in 2021. The last time they were healthy. However, they were among the most feared players in the game. Now, they combine their talents for the purple team.

It’s hard to predict any improvements after two weeks of camp, but the Vikings made the necessary investments for that. A new scheme, a new defensive coordinator, and new players are all fans could ask for. If the team can stay healthy on that side of the ball, better performance can be expected.

The Vikings 2022 Defense by the Numbers: After Week 15