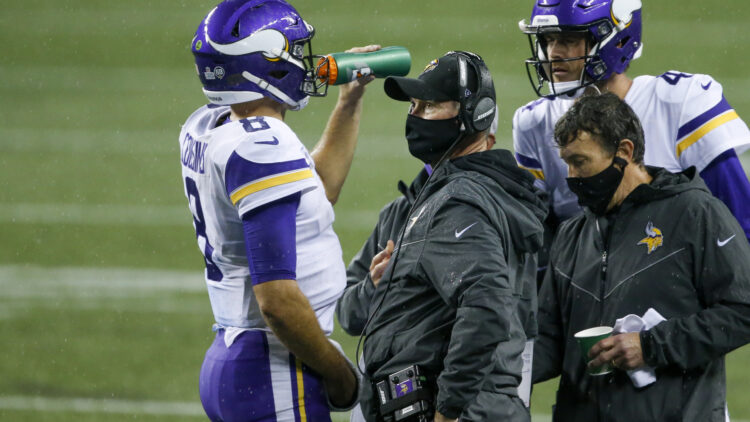 Kirk Cousins and Mike Zimmer as a QB-HC pairing may not have been a match made in heaven for wins and losses, but the alleged beef between the two was made up — or inferred erroneously by folks for the purposes of clickbait.

Media entities couldn’t resist the urge to conjure friction and spark misleading engagement. Some just wanted there to be a grudge for reasons unknown.

“Let me say this. I was fortunate enough to go to two Pro Bowls under Coach Zimmer. We won a playoff game, a very difficult playoff game nobody gave us a chance to win. I’ve gotten better every year that I’ve been here,” Cousins said to Barreiro.

Cousins continued, “I look back on my years with Coach Zimmer, and I say he was very good to me.”

After Zimmer was fired in January, most Vikings fans applauded the change as the Cousins-Zimmer combo had grown stale on the field, resulting in back-to-back years of mediocre football. The new leadership regime of Kwesi Adofo-Mensah and Kevin O’Connell retained Cousins for QB1 services, even extending his contract in March.

Yet, the takeaway — even now — from the Cousins-Zimmer years is misconstrued. People go about their lives assuming that because the two didn’t find much playoff success in Minnesota, they evidently couldn’t stand each other.

And the Cousins-Zimmer beef as “common knowledge” has persisted all offseason.

As recently as this summer, media entities have stated the Vikings ex-coach wanted to “fight” his quarterback after a Detroit Lions game.

Barreiro also asked Cousins in the same interview if the so-called tension between the two was exaggerated. Cousins replied, “It’s been very overblown.”

Cousins later stated to Barreiro that Zimmer benefitted his career, “I wish we won more games. The head coach and the quarterback tend to take the brunt of that, and they always have and always will. I think that it’s been a little bit misreported. I think he was an asset to my career, very much so. And I think that’s been lost somehow in the offseason.”

Overall, the important takeaway is to separate two notions mistakenly mixed-and-matched. They usually follow this logic:

Leaping to #2 as the conclusion and reiterating it is as fact lacks rational thought. It’s an exercise in controversy fabrication just for the sake of stirring the pot.

A quarterback and head coach can fail to win a Super Bowl without becoming enemies. Not everything has to be a juicy, dramatic hot take.

The Vikings and Cousins get a fresh start in less than four weeks when the Green Bay Packers enter U.S. Bank Stadium for a Week 1 showdown.

Shiba Inu Might Just Be Getting Started: David Gokhshtein

Free-Agent Pass Rusher off the Board

Per PFF, the Vikings Top Players from Best to Worst: The Preseason Edition