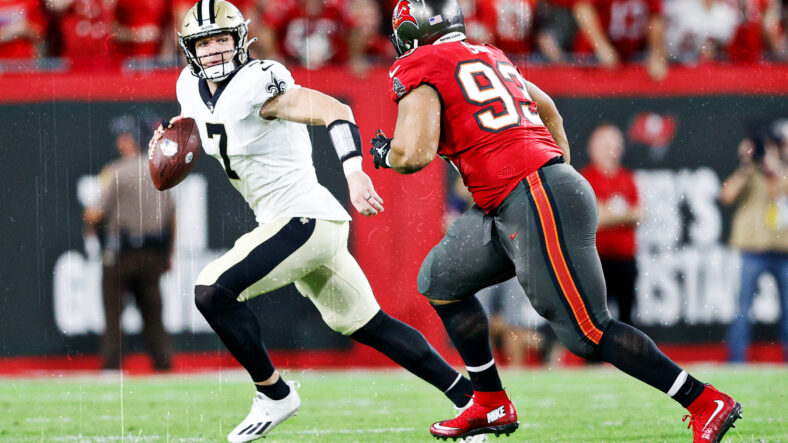 After minicamp, June and the first part of July are arid for dealings with the Minnesota Vikings and any other NFL team. The NBA takes center stage as its free-agency period dominates sports headlines.

So, when this tweet fell out of the sky two weeks ago, heads turned.

Ndamukong Suh, a future Hall of Famer, is evidently on the Vikings radar. A Super Bowl champion in 2020, Suh will not return to the 2022 Tampa Bay Buccaneers as general manager Jason Licht signed Akiem Hicks from the Chicago Bears in free agency to take over Suh’s job. And, yes, the Vikings were linked to Hicks too for a while this spring, but it was not as tangible as the Tyler Dragon tweet.

Soon after the Suh-Vikings tweet from June 21st, Vincent Bonsignore from the Las Vegas Review-Journal reported, “The sense is the Raiders aren’t as keen on the idea as Suh is, at least at the moment. That is always subject to change depending on how the Raiders assess their defensive line needs ahead of training camp. And money always plays a role. But for now, it appears the interest is not mutual.”

And that left the Vikings as the leading contender to land Suh’s services.

Then, however, everything about Suh to Minnesota stopped. Crickets. The mention from Bonsignore that the Raiders had no palpable interest in Suh was the end of discourse. A few other sites have inferred Suh “would be a good fit” for a respective team, but the rumor trail ran cold.

That’s good news for Armon Watts, who figures to fill the “Suh role” for the Vikings this September. Watts had an unexpectedly productive season in 2021, while ex-Viking nose tackle Michael Pierce missed games due to injury. If Minnesota does not sign Suh, onlookers of the Vikings will get a verdict on Watts’ forecast as a long-term starter.

Suh turned 35 in January, so the five-time Pro Bowler and five-time All-Pro is nearing the end of the road. However, a hallmark of Suh’s resume is health. He’s played in the NFL for a whopping 12 seasons and has never missed a game to injury. Unless everything suddenly changed upon arriving in Minnesota, the Vikings would onboard a sure-fire starter with a bevy of playoff experience — if they’re indeed interested in him at all.

The Nebraska alumnus certainly isn’t as dominant as five years ago — he fired up a lackluster 49.4 grade from Pro Football Focus in 2021 — but Suh could have some left in the tank for 2022 and provide instantly leadership credibility.

In theory, a Suh addition would look like this upfront for Minnesota:

And if that doesn’t get Vikings fans excited, something is awry.

Vikings general manager Kwesi Adofo-Mensah has the cap space if he’s intrigued by a Suh addition. As of July 3rd, Minnesota has about $11 million in cap space. Suh earned $9 million in 2021 and doesn’t figure to be more expensive after his ho-hum performance in the final season with the Buccaneers.

Suh could sign with the Vikings tonight — or not sign at all. Two weeks ago, the relationship felt realistic. Since then, though, the chatter has dwindled.

Teams with Suh on the roster are remarkably 7-4 against the Vikings in his career.

Depression and Stress in Teens: What to Look for and When to Seek Help

Did the Vikings Choose the Right Quarterback?

No Silver Linings for the Vikings on Sunday, The Stats Just Make it Worse…