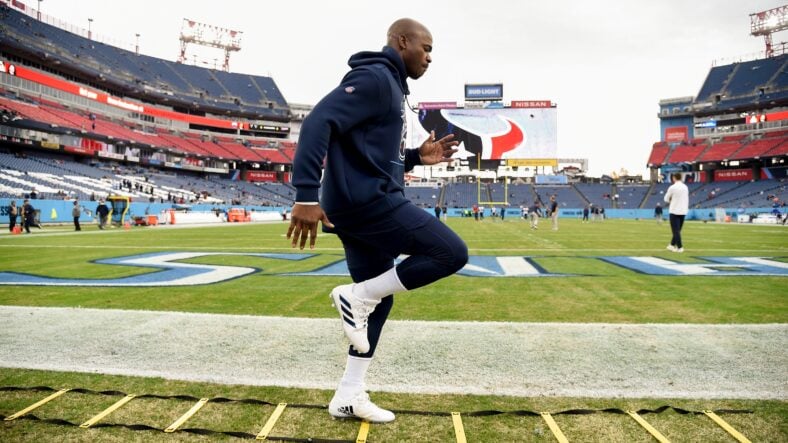 Soon-to-be multisport athlete Adrian Peterson steps into the boxing ring at the end of the month, and he could land with an NFL team this autumn, too.

Peterson squares off against fellow running back Le’Veon Bell in a boxing exhibition at Crypto.com Arena in two and a half weeks.

And true to offseason-Peterson form, he has no imminent plans to retire from football. Peterson turned 37 in March.

Annually, Peterson tells the media he plans to play the upcoming season — and ends up doing so. The 2022 campaign is no different. Last year, he latched onto the rosters of the Tennessee Titans and Seattle Seahawks for brief stints.

At a promotional event for the Bell fight on Tuesday, Peterson mentioned his training regimen, “We have a lot of guys sparring all the time, and I’ve had the opportunity in the past to get in there with those guys a couple times and here recently, obviously, getting ready for the fight. I just been kind of grinding, so I might see this continue to do something going forward.”

Peterson continued, “So, even after this fight, I will still be on my same routine, waiting for that next opportunity to present itself.”

Since departing the Vikings after the 2016 season, Peterson has played for Saints, Cardinals, Commanders, Lions, Titans, and Seahawks — a journeyman indeed. Peterson has participated in five playoff games in his career, all with the Vikings.

Minnesota scooped Peterson out of the 2007 NFL Draft, rejuvenating the franchise for a decade. The team reached the NFC Championship with Brett Favre at quarterback in 2009 while Peterson ran wild in his third season. Peterson is the NFL’s fifth-leading rusher all-time and needs 352 yards to pass Hall of Famer Barry Sanders for fourth place. The ex-Viking is 3,437 yards away from the all-time rushing king, Emmitt Smith.

It is unclear what role Peterson would plan on an NFL team in 2022. He scored two touchdowns in Year 15, though. Perhaps he’d fill an RB2 or RB3 role for an RB-needy team.

Peterson told FOX9 in Minneapolis back in March he’d like to retire with the Vikings.

Streaming access to the Peterson-Bell pay-per-view can be purchased here.

How retailers are supporting families during the summer holidays

Former Vikings Quarterback Once Again Looking for a Team