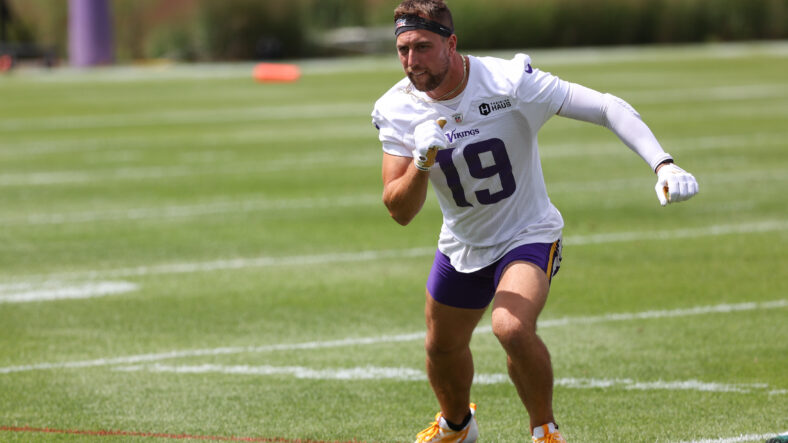 There’s an idea out there that Adam Thielen has and will continue to decline. At 32 years old, the Minnesota native is undoubtedly in the twilight years of his career. He hasn’t topped 1000 receiving yards since doing it in back-to-back seasons in 2017 and 2018. If you look at receiving yards stats in isolation, it is easy to conclude that Thielen is in decline. However, missing games through his hamstring and ankle injuries have hindered his progress in the last three seasons.

Injuries are a concern as players age, and injuries continue to mount. He saw very little playing time at the back end of last season, which explains the dampened enthusiasm for Thielen in some quarters during the offseason. The success of Thielen’s season could hinge on his health.

To have a chance of reaching that magical 1000 number again, he will need to play in every game for the first time since 2019. I predicted a big season from Thielen in the offseason, and I’m sticking by it. What I’ve seen in the opening four weeks has only increased my optimism.

Thielen has 21 receptions through four weeks from 28 targets for 221 yards at 10.5 yards per reception and 1 touchdown. That puts him on pace for 939.25 yards throughout a 17-game season. One noticeable thing is that Thielen’s targets, receptions, and yards increased for each game. With a new head coach and play caller implementing a new offensive scheme. Perhaps that’s a sign that Thielen and Kevin O’Connell are getting more in sync in this new Vikings offense. Maybe the best is yet to come.

Thielen has made a name for himself as a red zone specialist over the last couple of years, where he has been prolific in the end zone, notching up 24 touchdowns from 28 regular season games. This year he has only managed that solitary score against the Lions in Week 3. It was. However, a landmark touchdown as the man from Detroit Lakes became only the fourth undrafted player since 1967 to have 50 reception touchdowns, putting Thielen in some good company.

A feature of the Viking’s win against the New Orleans Saints was the failure to capitalize when in the red zone. On that occasion, relying on Greg Joseph’s field goals was enough. In the future, the Vikings need to improve and put teams away by scoring touchdowns. That responsibility doesn’t fall solely on Thielen’s shoulders but as a veteran whose reputation has been built in that area of the field. He is a player the Vikings should look towards to get them going.

Since Justin Jefferson came to Minnesota, Thielen’s role has transitioned. He is no longer the player the Vikings look to for a big play down the field. Jefferson or even KJ Osborn is more likely to get that look. The short to intermediate routes in critical moments when the Vikings need a first down is when to expect Thielen to step up. The stats bear this out, as Thielen has 16 first-down catches through four weeks. This puts him level with Jefferson and only behind Dalvin Cook’s combined rushing and receiving total of 19.

Theilen’s longest reception to date is 22 yards. There is always a chance a big play will happen, but around the 10-20 yards mark is where I expect Thielen to do most of his work. We are already seeing some teams become almost obsessive over stopping Jefferson. The feeling was that this would give more opportunities to Thielen and others to make plays. This certainly can be the case, but Jefferson’s return to form with 147 yards receiving and a touchdown on a jet sweep. It coincided with Thielen’s best game of the season so far, with a stat line of 8 receptions on 9 targets for 72 yards.

Thielen still possesses smooth route running and strong hands, with the ability to make plays whatever the game plan is. Any talk of Thielen’s demise is premature. In a somewhat stuttering Vikings offense that hasn’t entirely found its stride under the guidance of O’Connell. He has had a solid and continuously improving start to the season.

There is a lot more yet to come.

Vikings May Get Weapon Back before End of Season

The 2022 Vikings, According to All National Power Rankings: Week 9