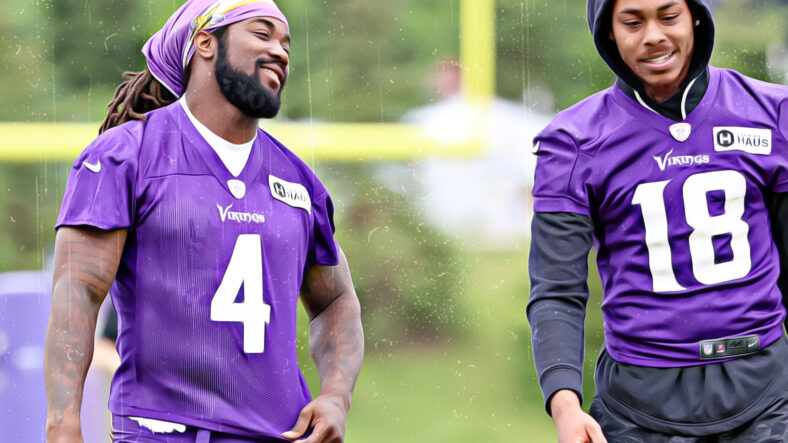 Aaron Donald is the undisputed best player in the NFL, and the Minnesota Vikings have three men in the Top 100, according to CBS Sports‘ Pete Prisco, who released his Top 100 players of 2022 on Tuesday.

Foremost, the highest Viking on the list was, unsurprisingly, Justin Jefferson, whose ascent to superstardom in the NFL only took a couple of months. Prisco plopped the Vikings wideout at #13, mentioning, “It’s scary to think what type of leap he can make this season as he better understands the position.”

After that, some 28 rungs down the latter arrived Dalvin Cook, the Vikings RB1, at #41. Cook enters Year 6 of his productive career, hoping to showcase a new pass-catching flair inside Minnesota’s shiny new offense led by Kevin O’Connell. Prisco opined on Cook, “He also caught 34 passes, and that number should go up this season as the Vikings might use him more in the passing game — even outside.”

Two down — one to go. Rounding out the Vikings nods on Prisco’s Top 100 was Harrison Smith, the team’s longstanding safety and anchor of Mike Zimmer’s defense for eight seasons. Smith checked in at #99 with the commentary, “The veteran safety is coming to the end of his career, but he put the talk that it’s over to rest last season with another impressive year, even on a bad defense.”

For those interested in the “snub” category, the following men were not accounted for at all by Prisco:

The version of this list voted on by players should hit the news wire from NFL Network in August.