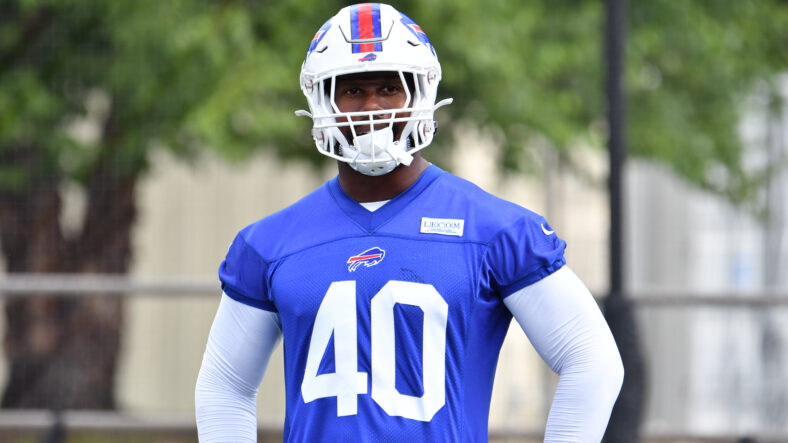 The Minnesota Vikings play the Buffalo Bills in about 14 weeks — the toughest game on Minnesota’s schedule from a birdseye view. And if future Hall of Famer Von Miller gets his way, free-agent Odell Beckham will be a part of the Bills roster by then.

Miller signed with the Bills in March after winning a Super Bowl as an integral part of the Los Angeles Rams. Before Los Angeles, Miller spent 9.5 seasons with the Denver Broncos.

And a part of the perk of having Miller on the roster is evidently recruiting possible Hall of Famers along for the ride. Miller posted this to Instagram on Monday:

Beckham, too, played with the Rams in 2021, earning a ring in the process, although suffering an injury during the win over Cincinnati. Beckham figures to be ready for 2022 sometime around midseason. He enjoys the idea of joining of the Bills:

Spending five years with the New York Giants to start his career, Beckham ventured to the Cleveland Browns in 2019 via trade. He posted a productive season in 2019 but battled injuries in 2020 and 2021. Beckham encountered a rift with then-quarterback Baker Mayfield and forced his way off the roster. The Rams signed him soon after.

Beckham would fit nicely with the Bills, pairing with Stefon Diggs and Gabriel Davis in the WR room. Josh Allen, the QB1, is the favorite to win the MVP award in 2022 with a +700 moneyline as of early August. Buffalo is also the frontrunner to win the Super Bowl, outpacing the Tampa Bay Buccaneers and Kansas City Chiefs with +600 odds.

The Bills have fallen just short of reaching the Super Bowl two years in a row — thanks to Patrick Mahomes and the Chiefs. In back-to-back seasons, the Chiefs have caused the Bills exit from the postseason. Adding Miller and Beckham might be the twosome necessary to fling the Bills over the top or at least reach the Super Bowl for the fifth time in team history.

The Vikings face the Bills in Week 10 of the regular season. The last time the two squads met, Josh Allen made an early name for himself by leading Buffalo to win over the Vikings at U.S. Bank Stadium. Minnesota was considered a fierce homefield opponent at the time, but Buffalo dropped the purple team in its building 27-6 in 2018 — an embarrassment, to be sure.

Buffalo has a litany of Vikings connections, including the aforementioned Diggs, who was traded by the Vikings to the Bills 2.5 years ago. Former Vikings quarterback Case Keenum is the backup passer to Allen. And Dalvin Cook’s brother, James, was drafted by the Bills in April.

Per opening lines, the Bills are favored to beat the Vikings in that matchup by 7.5 points. We shall see if Miller’s recruiting does the trick to land Beckham to an already dangerous roster.

Dogecoin (DOGE) Breaks Through, Reaches Resistance Level Ahead of Rally

In-House Corner: The #1 Thing Freaking You Out at Work – Part 2

What We Learned after 2 Weeks of Vikings Training Camp