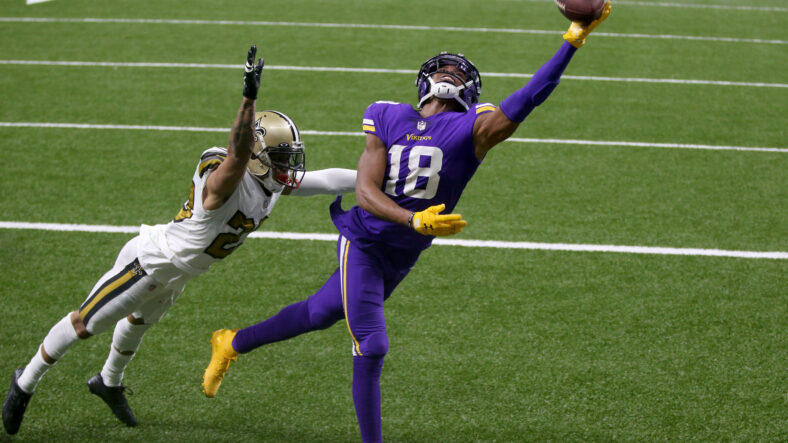 The Minnesota Vikings took Justin Jefferson with the 22nd overall pick in the 2020 National Football League draft. While today is Jefferson’s 23rd birthday, him falling past the Philadelphia Eagles was a nice gift for the team in purple. Now a few years into his career, what can we expect in the years ahead?

Making his debut at 21 out of LSU, Mike Zimmer didn’t start Jefferson until a few weeks into his rookie season. Ultimately drawing 14 starts during year one, it was almost immediately evident that this was a special talent. Jefferson put up a 1,400-yard season and showcased his patented Griddy dance seven times reaching the end zone. He just missed out on Rookie of the Year honors but was a Second-Team All-Pro and made the Pro Bowl.

Last season was more of the same for the suddenly well-established superstar. Jefferson accumulated 1,616 yards across 17 games, in which he was now the featured starter. Another 10 touchdowns were racked up, and Jefferson grabbed All-Pro and Pro Bowl honors once again. He topped 100 receptions for the first time in his career, and the conversation has now changed to question whether he’s the best receiver in the entire league.

Because the Vikings haven’t seen a talent this good since the Randy Moss days, it’s worth looking at how the numbers stack up. Through his age-22 season, Moss totaled 2,726 yards and 28 touchdowns. Although Jefferson surpassed the yardage totals, it’s hard to compete with a 17-touchdown season in which 24% of Moss’ passes caught resulted in six points.

Obviously longevity is the name of the game and how Moss wound up in Canton being inducted into the National Football League Hall of Fame. Looking back at his third year, though, when he was also 23, Moss put up a new career-high in yardage, and it wound up being a mark he would top just two more times throughout his career. Firmly entrenched as a go-to target like Jefferson, Moss grabbed passes at nearly a 60% catch rating, something Jefferson has already surpassed in both of his previous seasons.

It stands to reason that a new offensive-minded head coach in Kevin O’Connell will bring additional opportunity to an already exciting offense. Adam Thielen returns to the fold in a better place regarding his health, and Dalvin Cook should continue to spread the field behind Kirk Cousins. Although there are plenty of mouths to feed, it will remain a “pick your poison” scenario for opposing defenses, and Jefferson can find room to feast.

Just 33 games into what hopefully is a decade-long career, Jefferson has already risen to the elite tier amongst his peers. Taking another step forward should be expected, given his youth and development, but the reality of that being possible seems nightmare-inducing for opposing defenders.

Vikings fans can celebrate along with Jefferson today as he looks to be the type of talent that should continue being the gift that keeps on giving.

Looking Back at the Vikings Underwhelming 2019 Draft