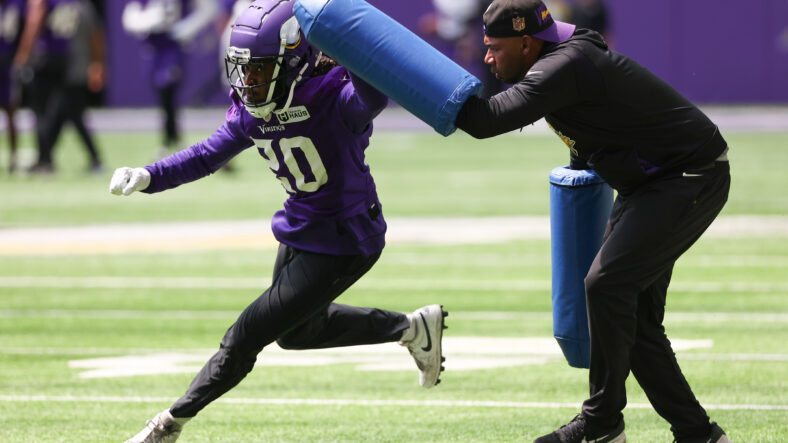 The Chicago Bears adore players who formerly played for the Minnesota Vikings, signing eight such men who are somewhere on the current roster.

The Vikings released Hand during roster shave-downs to 85 players on August 23rd. Hand then became a New York Giant, a short-lived experiment that ended less than two weeks later. The NFL expanded practice squad personnel to 16 players in the spring.

Minnesota releasing Hand three weeks ago was a surprise, as most believed the 23-year-old would land on the Vikings practice squad, not the Giants or Bears version. Hand showed flashes of production periodically in Minnesota and was a special teams contributor. But the Vikings added corners Parry Nickerson, Tay Gowan, and Duke Shelley to the practice squad instead.

A 5th-Round pick from the 2020 NFL Draft, Hand became a player drafted by Minnesota’s former front office who wasn’t a priority to retain. The Vikings changed general managers in January, moving on from Rick Spielman to Kwesi Adofo-Mensah. And the new bossman got rid of several draft alums from the Vikings 2021 draft class, too.

Hand played in 23 games for Minnesota while starting one — a Week 17 in 2020 game at Detroit. In the game before he got the nod as a starter, the Vikings were trounced in a Christmas game versus the New Orleans Saints, but Hand stood out with three tackles, two passes defended, and an interception — as a rookie.

Overall, Hand played 165 defensive snaps in Minnesota and was on the field for 261 special teams plays. His significant special teams input suggested Hand might be safe to make the Vikings 2022 roster, but no such luck.

As of September 13th, Hand is the only cornerback on the Bears practice squad.

Chicago’s general manager Ryan Poles has made a habit of plucking former Vikings for his roster, adding these men since he joined the Bears eight months ago:

Blasingame, Reiff, Siemian, Smith-Marsette, and Watts are on the Bears active roster, Gates and Hand are practice-squaders, and Dozier is on injured reserve.

Poles also signed former Vikings WR Sharpe during the offseason, but he is now a free agent.

Mike Zimmer Has a New Job

The Best Team in Vikings History Is Not the 1998 Team