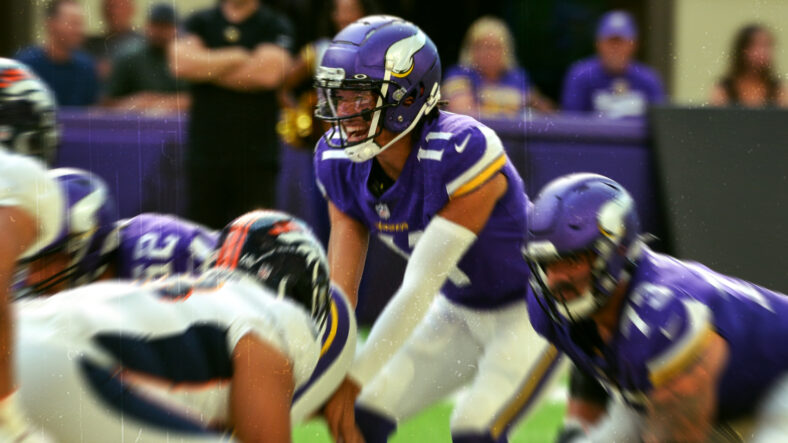 The Vikings entered training camp and work to get in shape for the upcoming season. Some players, however, won’t make the team.

Currently, 90 players are under contract, and only 53 can be on the roster after the cut day, August 31st. The players have about five weeks with the team, including three preseason games, to positively change decision-makers’ opinions.

After cutting Nate Stanley recently, the Vikings only carry three QBs on the roster. Most franchises, including the former teams of Kevin O’Connell and Kwesi Adofo-Mensah, go into the season with two. Mannion is a candidate for the practice squad if he, indeed, is an important part of the team, as the previous regime always mentioned. From an on-field perspective, Mond should beat him out, as he’s, simply put, more talented.

One of the best position groups on the team, the Vikings will keep five backs on the roster. Cook will start, Mattison, Chandler, and Nwangwu will form the trio of backups, and Ham is an excellent fullback. Ham and Nwangwu are also important special teamers, which makes it easier to carry that many backs. Koback and Bargas are practice squad candidates (especially Koback), and it will be important to see how each man performs in camp and preseason.

Jefferson, Thielen, and Osborn will certainly make the team. Smith-Marsette is the favorite to be the WR4. The final two spots are a tough choice. Wilson and Nailor were brought in by the new regime, which should help them. Chisena could make the team because of his special team heroics. Johnson and Proehl return from torn ACLs and shouldn’t be counted out.

A concerning position group for the Vikings. Smith enters a contract year. He’s talented but still has a lot to prove. Mundt and Ellefson are mainly blocking tight ends. Davidson and Muse are strong practice squad candidates, and it would help the Vikings if one of them shows enough to make the roster. Especially Davidson has a lot of upside because of his athleticism.

The starters, and the players competing for a starting job, make the roster. One of Reed, Jesse Davis, and Ed Ingram will start at right guard. Lowe and Udoh are backup tackles. The Vikings may opt only to keep one of them. Brandel could take Lowe’s spot. Wyatt Davis has to show huge improvement.

Tomlinson, Phillips, and Watts are roster locks. Lynch has shown some upside in recent years. Behind him, it’s a close race. Bullard has familiarity with his defensive line coach Chris Rumph and defensive coordinator Ed Donatell. Twyman missed last season, but his quickness and pass-rushing ability make him a valuable asset. Rookie Otomewo is a lock for the practice squad.

Vilain and McCloud have upside and are worth a look at the practice squad. Mintze made the Broncos roster last year as an undrafted rookie, so he shouldn’t be counted out. Wonnum, Jones, and Robinson were all mid-round picks of Rick Spielman, and one of them has to take a step forward to be a real alternative for the two stars, Hunter and Smith.

The first three names are locked in. Kendricks and Hicks will start, and Asamoah won’t be cut as a third-rounder. Blake Lynch has shown promise when given the opportunity in 2021. Surratt looks like another wasted third-round selection, but like Wyatt Davis, he has a chance to turn things around. Troy Dye was replaced by a similar player type when the Vikings drafted Asamoah.

First-rounder Cine has to win the obligatory battle for the starting spot next to Smith. Bynum earned the right to have a camp competition after strong showings in 2021. Metellus was a backup in recent years and will stay in that position.

Two of Peterson, Dantzler, and Booth will start. Evans has high potential, and GM Adofo-Mensah is a big fan of him. Sullivan and Hairston can play in the slot and make the team. The first five are probably a lock, while Hairston has to beat out, especially Boyd and Hand. But the scheme familiarity and his knowledge of Donatell will help him.

Joseph already beat out his competition when undrafted rookie Gabe Brkic was cut. Berry wins his battle against Wright.

Another Trade for Vikings, This Time with PIT

PurplePTSD: The Snug Salary Cap, How the OL Was Built, AFC East Predictions