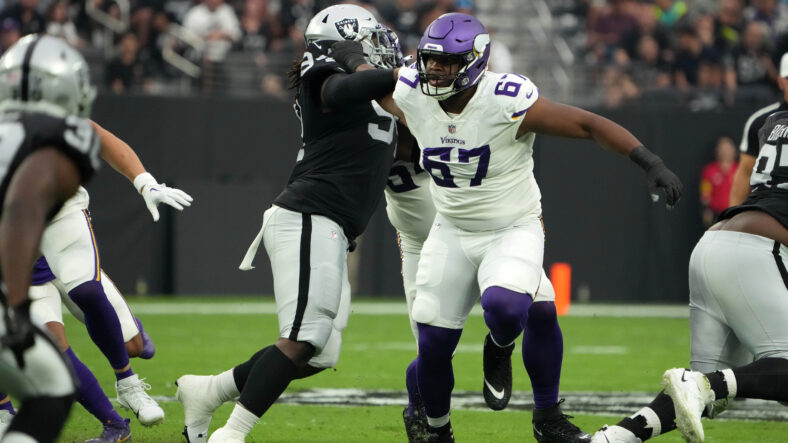 The Vikings lost their first preseason game in 2022 against the Las Vegas Raiders 26-20. However, some players were winners. In no particular order, these five Vikings players or position groups stood out the most.

All Vikings reporters have been raving about the defensive tackle since training camp started. He dominates center Bradbury daily. However, in the game against the Raiders, he showed that he does the same thing to other linemen as well. He had two run stops and looked dominant on both, pushing opponents around and finding his way to the running back.

He was signed to replace Michael Pierce after his two disappointing years in Minnesota. The three-year deal worth under $20 million looks like a steal so far. The Vikings count on him to continue his run-stopping presence.

In this play, he was in a great position to contain the quarterback Stidham, reacted to his scrambling attempt, and took him down after four quick steps. He’s not just strong. He also has the necessary quickness to make plays. Two good defensive tackles are the first step to an improved rushing defense.

Alexander Mattison started the game. Star rusher Dalvin Cook didn’t play, which was an obvious, but still great decision by the coaching staff. He misses games regularly, and there’s no need to have him play in a preseason game. Mattison had just eight yards on three carries. He looked like the Mattison from recent years, a serviceable backup without big play burst. The offensive line didn’t help much.

Two other Vikings running backs, however, flashed greatness and were big winners against the Raiders. Star return man Kene Nwangwu got the first carries after Mattison’s day was finished. He rushed for 41 yards on just seven rushing attempts. Nwangwu also added valuable reps in the passing game, as he had 18 receiving yards on two catches. Both plays were classic checkdowns, one from Mond, the other from Mannion, and he took both for a first down. On the pass from Mannion, he showed his elite speed. On the reception from Mond, he broke a tackle and showed power.

Even more impressive played rookie Ty Chandler. He had five carries and recorded 50 yards. Ten yards per attempt is a ridiculous number.

Both runners are known for their elite straight-line speed, as they both ran a sub 4.4 seconds 40-yard dash. However, in the first preseason game, they showed their agility and shiftiness. They might have a chance to earn some playing time.

The two running backs got help from their offensive line. After the starters (Darrisaw, Cleveland, Bradbury, J. Davis, O’Neill) finished their day, the backups came in and dominated the Raiders’ defense. The two Vikings tackles were Blake Brandel and Oli Udoh. Udoh had a disastrous 2021 season at guard, but he’s a much better tackle, and it showed once again.

Center Schlottmann had some nice reps and created holes for the running backs. Chris Reed didn’t play. The guard is in the midst of becoming the backup center, so Schlottmann probably won’t compete with Bradbury. The guards showed promise as well. Kyle Hinton was a practice squad member of the Vikings for the last two years. The big attraction was the other guard, Ed Ingram. The second-round rookie had an impressive showing against the Raiders. He pushed around defenders in the running and passing game.

Despite playing with the second team while Davis played with the first team, it would be surprising if Ingram won’t win the starting job before the Week 1 matchup against the Packers. The whole Vikings backup group deserves to be called “winners” after a strong performance against the Raiders.

The defensive end didn’t play much last season when he recorded just 99 defensive snaps without a lot of flashes. In the preseason game against the Raiders, however, he had a fantastic game. He had at least five pressures and looked great against the Raiders’ right tackle Munford. He was a big reason for the given-up touchdown run by Stidham, as he overran the play but more than made up for it with a great performance.

Jones apparently is the fourth edge rusher in the mix, after stars Danielle Hunter and Za’Darius Smith and backup DJ Wonnum. He might challenge Wonnum for the primary backup spot.

The rookie didn’t draw the start next to Jordan Hicks, as Troy Dye started the game. But in a few plays, the linebacker showed why the Vikings selected him in the third round. After a pass to Kenyan Drake, he landed a huge hit. The play was called back for a holding, but the hit is still on tape.

He also had a fantastic run stop inside the Vikings five-yard line. Asamoah diagnosed the play and used his explosiveness to chase the runner down and record the tackle for loss.

He has the talent to become the Vikings linebacker of the future. In 2022, he will be the backup of Eric Kendricks and Jordan Hicks, two excellent veteran linebackers. Troy Dye will soon be usurped on the depth chart.

Kellen Mond had a great fourth quarter against worse competition but struggled in the second against better opponents. On each of the two touchdown drives, he had two high-level throws, including the touchdown passes to Albert Wilson.

Despite all that, he missed a few throws, and his throws are still late at times, which always gives the secondary a chance to catch up to receivers or pass rushers to get to him. The Vikings backup QB still deserves mention as one of two honorable-mention winners because his competitor Sean Mannion didn’t look like an NFL quarterback against the Raiders.

Lewis Cine has shown why he was a first-round pick. His speed is sensational, and he always uses it to be close to the ball. Whenever there’s a tackle made at the second level, chances are high that Cine is close to it. Cam Bynum is a good player, but Cine will be the starting safety sooner rather than later.

Aldi gives thousands of warehouse staff up to 9% pay rise

The Vikings 2022 Defense by the Numbers: After Week 10

Vikings Don’t Care about The Past