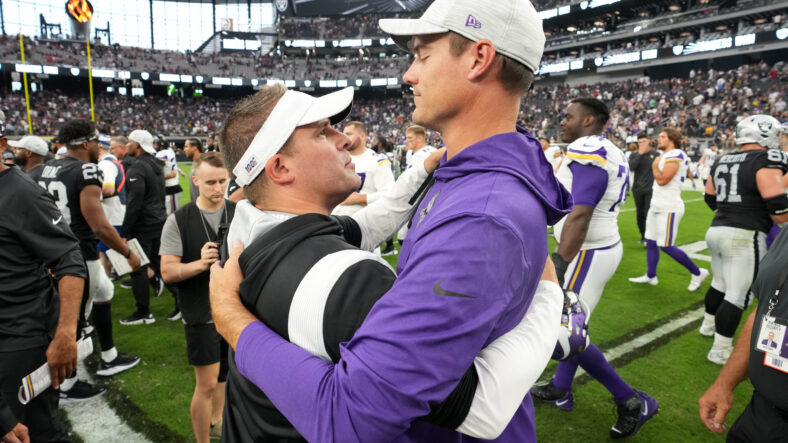 The Minnesota Vikings have completed their preseason slate heading into the 2022 regular season, and Kevin O’Connell is ready to turn the page to games that matter. We can look back at the results and see very little substance. There’s plenty to be gleaned from the gear up to go-time, however.

This season represents a substantial opportunity for the Minnesota Vikings to turn the page on a regime that largely wore out its welcome. Mike Zimmer and Rick Spielman are gone. This is now Kwesi Adofo-Mensah and Kevin O’Connell’s franchise. Ed Donatell is attempting to right the defense, and Wes Phillips isn’t someone’s family member.

Before the games that matter kick off, here are a few takeaways from the results that don’t.

There’s no reason preseason games exist other than to sell tickets and pad revenues for ownership. You’ll often hear that joint practices are far more impactful when deciding what players will make the final 53-man roster. Minnesota didn’t allow any key starters to get on the field, which doesn’t change the likely reality that they remain 100% ready to go against the Green Bay Packers.

A single preseason game may be helpful to decipher what’s taking place in practices amongst the backups, but the action is essentially fodder for fans to tune in and sales to be had on television and in the stadium. The rash of injuries in these games makes it hard to do anything more than hope your favorite team makes it out alive.

2. The Vikings have no center

Garrett Bradbury has been a colossal trainwreck, which has primarily continued throughout the Training Camp portion of this season. It appears that O’Connell will start another veteran at the spot. Chris Reed is a guard but took reps at the position and has limited experience. I can’t imagine Austin Schlottmann will be snapping to Kirk Cousins, so we’re in for some uncertainty.

All offseason, J.C. Tretter’s name remained on the minds of Vikings fans. Adofo-Mensah knows him well enough to understand his knees are cooked. Maybe the reality of retirement was immediately suggested, but now that it’s official, that avenue can close. Maybe the Vikings will trade for someone down the line, but it is an area they’ll need to keep an eye on throughout the season.

3. Lots of rookies should contribute

Lewis Cine may not be a day one starter, but he’ll play alongside Harrison Smith plenty. We’re going to see Ed Ingram on the line, and Andrew Booth Jr. will be out there as long as he’s healthy. Early returns from linebacker Brian Asamoah suggest he belongs on the field, and that’s while understanding Minnesota has a strong unit.

Jalen Nailor has been a darling since he was drafted, and opportunity continues to present itself. He has shown plenty of skills that make him likely to see the field. Olabisi Johnson’s knee injury now makes it imperative that he find a way to contribute. The front office did a good job drafting for need and depth this season. They’ll look to see it play out.

4. Kicking could be an asset

This is weird to suggest in Minnesota, but much praise has been showered on Greg Joseph this summer. He’s been bombing kicks in practice and now nailed a 58-yarder to close out the preseason schedule. Rather than wide left or wide right, it’d certainly be nice for the Vikings to find consistency when trotting out the special teams unit.

On the flip side, veteran punter Jordan Berry was cut in favor of rookie Ryan Wright. Maybe that creates some comfort questions in the holding game, but the linebacker-looking leg has plenty of boom to flip the field. Wright looked the part of a big-leg punter and earned the job for Minnesota. This duo could go down as one of the better tandems in team history if they hold serve, and Wright may wind up being the rookie this Vikings regime actually hangs onto in the kicking game.

5. Locked and loaded to surprise

Minnesota continues to be dumped on from a national perspective. Despite the immense skill position talent, this team returned from last season, they continually find themselves in the bottom half of preseason power rankings. O’Connell certainly isn’t concerned about that, and the chip should be massive on many shoulders.

There’s a reason why no key players stepped foot on the field during these exhibitions, and it’s largely because they’re already keyed in on the games that matter. Minnesota has a chance to make some real noise and could be a sleeper Super Bowl team. If that’s going to happen, coming out and smacking the Packers in week one is a must.

Confounding Purple Pulls out a Win Over the Lions- Vikings Territory

Vikings Player Will Explode into Stardom