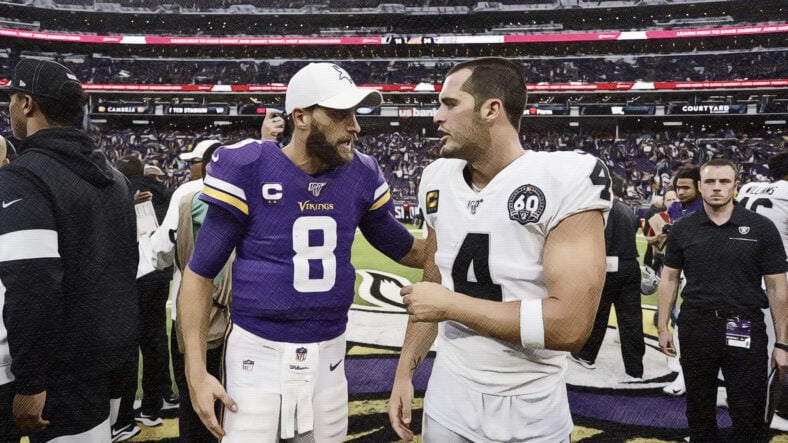 On Sunday, the Minnesota Vikings are scheduled to open their 2022 preseason in Las Vegas against the Raiders in Allegiant Stadium. While the Vikings will be the last team in the NFL to play a preseason game, the Raiders were the first when they played in the Hall of Fame game against the Jaguars, and the Raiders were victorious. The two franchises have a lot of similarities.

After a tumultuous 2021 season, both teams let go of their head coaches. The Vikings fired their 8-year leader Mike Zimmer. Rich Bisaccia, meanwhile, the Raiders’ interim HC didn’t get the job long-term. Zimmer is currently without a job. Bisaccia is the special team coordinator of the Green Bay Packers and tries to fix a bad unit there.

Both organizations signed a highly coveted offensive coordinator. The Vikings hired Rams OC Kevin O’Connell, a first-time head coach. The Raiders, meanwhile, hired Patriots OC Josh McDaniels. He had a position as Broncos head coach for almost two seasons over a decade ago. It didn’t end well, as he was fired midseason. He turned down the Colts head coaching job in 2018 after he was already announced, which cost him some credibility in the league. However, his name has surfaced every year since.

McDaniels and O’Connell have the task of transforming average offensive units into elite ones — a real possibility with the current rosters.

The teams both employ a star-wideout on their team. The Vikings selected Justin Jefferson in the first round of the 2020 draft and used a pick they got from trading Stefon Diggs to the Bills. Jefferson somehow instantly replaced one of the best receivers in the NFL and has been playing at an elite level since then. The Raiders acquired a special wideout as well when they traded for Davante Adams in the offseason. The star receiver requested a trade to his new team and signed a big extension. He’s now reunited with his former college teammate at Fresno State, Derek Carr.

There’s a good chance that Adams and Jefferson will, once again, be among the receiving leaders in the league. Jefferson recently ranked Adams the league’s top wideout and said catching Adams is his main goal.

Most Vikings fans view the 2021 defense as bad, but the Raiders’ unit was arguably even worse. The Raiders were 26th with 25.8 points per game allowed. The Vikings were 24th with 25.1. It’s tough to play winning football with such a bad defense. In terms of yards, the Vikings were a lot worse, as they’ve allowed the third most yards in the league and the Raiders only the 14th most.

Unlike the Raiders, the Vikings invested heavily into their defense in the draft. The top two draft picks are defenders, just like the 4th and 5th. Lewis Cine, Andrew Booth, Brian Asamoah, and Akayleb Evans all have a chance to contribute early in their careers. The Raiders’ top pick and the second-round selection were part of the Adams deal, and the Packers made the picks. In addition, both of the Raiders’ top picks were offensive players when they chose guard Dylan Parham and running back Zamir White.

But the Raiders invested in free agency, as they signed star pass rusher Chandler Jones from the Cardinals. They also signed former Chicago Bears defensive end Bilal Nichols and Baltimore Ravens cornerback Anthony Averett. The three defenders were the most expensive players of their signings.

Both organizations were in a toxic place in 2021. The Raiders head coach Jon Gruden resigned midseason in the fourth year of a ten-year contract after it was publicly revealed that he sent multiple emails with inappropriate content. In addition to that, the Raiders had to deal with the fatal car crash of young receiver Henry Ruggs. He was allegedly speeding and driving under the influence. A young woman was killed in the crash.

The Vikings didn’t have to deal with events of the same extent, but the vibe in the building wasn’t great. Zimmer put various players in his doghouse, and they lost confidence. After the termination of Zimmer’s contract, Kendricks said that he didn’t want to play in a “fear-based organization.” Zimmer and former GM Spielman reportedly didn’t like each other personally, which apparently affected their working relationship. Both teams look into a future with hopefully less toxicity in the organization.

The organizations have quarterbacks that are good but not elite. Not even the biggest supporters of Derek Carr and Kirk Cousins would confuse them for Patrick Mahomes or Tom Brady. However, they are above-average starters, and many teams would be happy to have such quality passers. Both fan bases are torn; some love their signal caller, and some want to run him out of town.

The problem with big production in the NFL is that it’s expensive to have. The average salary of the QBs’ current deals ranks both in the top 10; Carr is 6th and Cousins 9th. They also rank in the top 10 quarterbacks with the highest cap hits.

Explained: Predictions and Analysis for Vikings-Lions

The Vikings Are Now Favorites in the NFC North