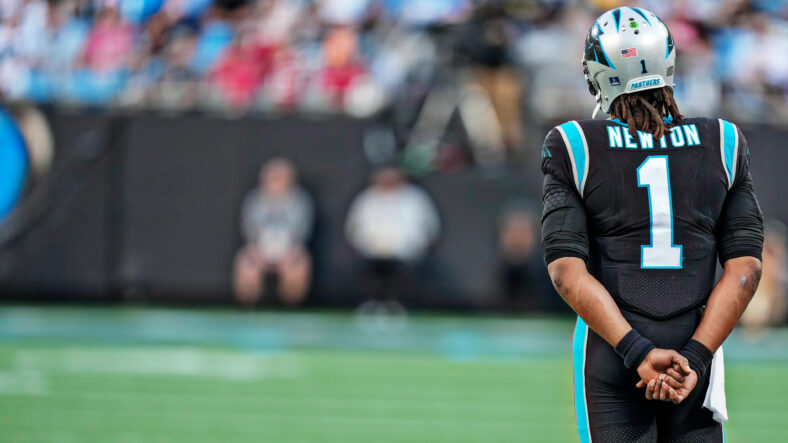 Now, though, it seems the franchise is open to signing an additional free-agent backup QB, mainly because the combination of Kellen Mond and Sean Mannion hasn’t bedazzled. Moreover, Kirk Cousins was “sent home” from practice on Thursday, uplifting the possible need for a more reliable QB2. Sean Borman from VikingsTerritory tweeted about the Vikings interest in more QBs:

So, these are the quarterbacks the Vikings can pursue at QB2 via free agency (in alphabetical order).

You might think, “Why would the Vikings need Blake Bortles?”

Well, this is for a backup quarterback job — not handing him the QB1 keys. Bortles can actually be classified as damn good QB2, evidenced by 73 career starts. Of course, in those starts, his teams are 24-49 — less than ideal. But he’s got the mojo to lead a team at QB1, and that’s what Minnesota would need if Cousins was shelved indefinitely.

Bortles has tossed 103 career touchdown passes to 75 picks. He’s “been there,” culminating in a 2017 AFC Championship appearance. Remember those days?

If the Vikings aren’t satisfied with Mond or Mannion, Bortles deserves a look.

Listen, this is late in the drill to explore free agents, especially at quarterback. NeckMan might be the best alternative. And like Bortles, this would be a reservist assignment.

Glennon has started 31 games in his career, and his teams have tabulated a ghastly 6-25 record on his watch. That’s worse than Bortles — by a mile.

Still, Glennon would be “trustworthy,” to a degree, to keep the ship afloat for a few weeks, presumably leaning heavily on Dalvin Cook and Alexander Mattison in the hypothetical games.

Glennon, 32, has thrown 47 career touchdowns to 35 interceptions. He last played for the New York Giants.

Hogan worked out with the Vikings one week ago. He should be considered the frontrunner to arrive as the Vikings QB4 based on that tryout.

A Stanford alumnus, Hogan has a teensy resume compared to Bortles and NeckMan, but Minnesota evidently worked him out for a reason. He’s also nicknamed The Gunslinger, and the Vikings had some luck with that nickname 13 years ago.

It is unclear if Hogan would play better than Mond or Mannion. But such is the case for most of these free-agent QB2 options.

The risk in signing Newton is a sect of Vikings fans mind-bogglingly stating he’s better than Kirk Cousins. Make no mistake — a handful of folks will convince themselves that the 2015 MVP ghost of Newton can be resurrected.

After you’re done laughing at that, realize that Newton would indeed be the best alternative on the market. However, with Newton’s famous hubris, he probably still thinks he’s a QB1. That could cause friction within the organization.

Regardless, if the Vikings want to emphatically fix the QB2 spot, Newton is the guy.

Be still, your heart.

Sloter’s football odyssey — even in the last four months — is wild. He was a USFL MVP candidate who was tabbed as “All-USFL.” His New Orleans Breakers lost in the semifinal round of the USFL playoffs. After that, he signed with the Jacksonville Jaguars, rubbing his palms together with eyes on their QB2 job.

Now, he personally endorsed a return to the Vikings.

Sloter even tagged Kevin O’Connell in the comment, so we shall see if the Vikings skipper reads his tweets. Probably not.

An acquisition of Sloter would mark his third stint in Minnesota. And, like the rest of these quasi-contenders, Sloter would be affordable.

A Day Late and A Dollar Short: Vikings Win T-Shirts and Hats!

Explained: What to Expect against the Cowboys