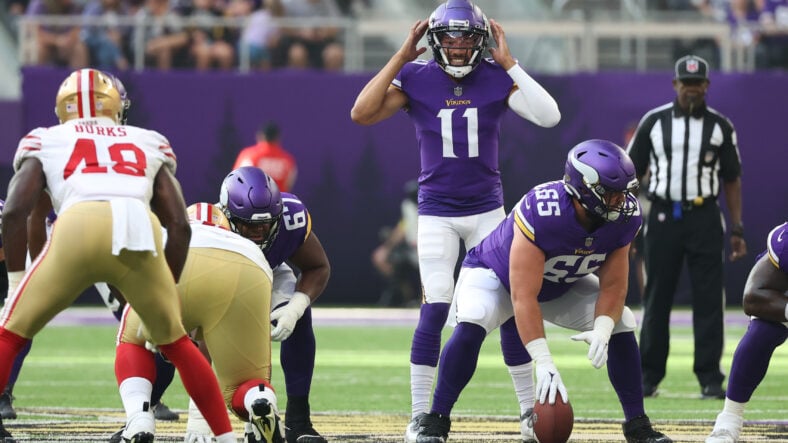 The Minnesota Vikings fell to 0-2 on Saturday in the preseason of Kevin O’Connell’s inaugural voyage, losing to the San Francisco 49ers 17-7 at U.S. Bank Stadium.

The game was mostly futile for the Vikings, as the team looks to rebound next weekend and round out the preseason in Denver. These are four takeaways from the contest.

T.Y. McGill — yes, that guy — notched five tackles, four QB hits, 1.5 sacks, and a tackle for loss versus San Francisco. After the game, O’Connell called McGill “a problem” in an endearing manner.

Few had McGill reaching the 53-man roster at the end of the month, but those folks better find an eraser that vanishes ink or start hitting backspace on the Google Sheet.

McGill also authored some good moments in the first preseason game, so perhaps the man is a legitimate depth defensive lineman, not an automatic roster cut. He’s overdue to stick around somewhere; McGill has been a part of 10 franchises since entering the league in 2015.

Booth appeared to tweak his ankle not long after baiting a 49ers player into a 15-yard-penalty. Nicely done on the latter.

After the game, O’Connell didn’t sound too concerned about the injury, noting that it was probably a flare-up of a prior injury.

Regardless, the Booth news is notable because this is (at least was) the knock on the Clemson alumnus — health. Booth fell to Round 2 of the 2022 NFL Draft due to injury concerns.

Well, if only for a few days, boom — an injury.

3. Brian Asamoah Continue to Fly All Over

Asamoah has fired up back-to-back eyebrow-raising outings, a perfect introduction for a rookie in the preseason. Of course, he’s not a total game-changer — nobody is for the Vikings through two exhibition games — but Asamoah’s unique skillset is evident during ordinary plays.

If something happens to Eric Kendricks or Jordan Hicks in 2022, Asamoah creates an atmosphere for anxiety to lessen. The early imprint of his potential is evident. It also helps soften the blow of Anthony Barr’s departure to Dallas.

On Saturday, Mond had a purplish and golden opportunity to capture the QB2 job by the esophagus. Instead, he may have sent the Vikings front office to Spotrac.com in search of free-agent passers.

The shine of Mond’s performance in Las Vegas — especially in the second half — was wiped away by the 49ers game. A couple of his throws looked downright high school-ish.

Mannion wasn’t much better, but one can certainly argue he was better than Mond — a cringeworthy standalone thought. In all likelihood, the Vikings will dust off QB2 contingency plans that were on the table before the preseason began.

In theory, Mond could dazzle next week in Denver, but his 49ers stinker will be hard to shake.

Is Week 1 Already a “Must-Win” Game for the Vikings?