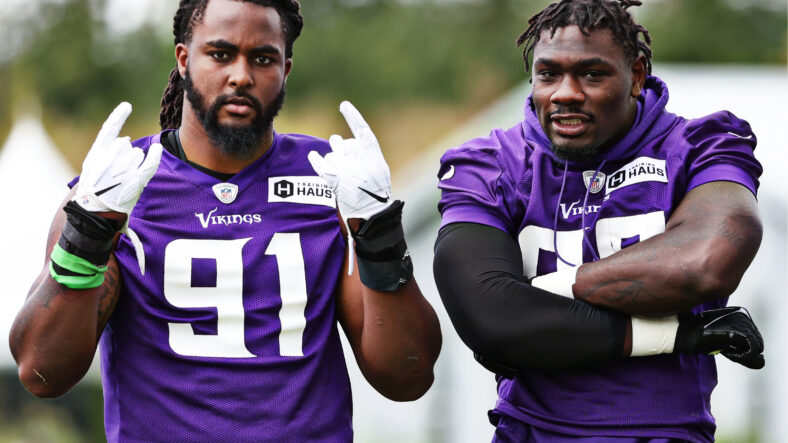 In addition to the manufactured Kirk Cousins controversy, there were also relevant Minnesota Vikings storylines and takeaways from Day 2 of training camp. Read about Day 1 takeaways here.

Here’s the latest from Vikings training camp on July 28th.

The Vikings leadership guaranteed collaboration and openmindedness when Kwesi Adofo-Mensah and Kevin O’Connell were hired. So far, so good.

The Vikings former coach, Mike Zimmer, began meeting with Kirk Cousins regularly in 2021, three years after the quarterback was welcomed to the team. Most wondered why it took so long. Well, O’Connell and Cousins are already on the same page, as O’Connell told reporters on Thursday, “The quarterback has to be an extension of you as a head coach.”

Plus, they’re meeting one-on-one out of the gate, according to the Pioneer Press‘ Chris Tomasson.

It should surprise no one that the former quarterback, O’Connell, is embracing his QB1. However, it didn’t happen with frequency from 2018 to 2020. Welcome to the new brand of Vikings.

Free-agent addition Jesse Davis is still the frontrunner to land the RG1 job. Davis played OT for the last three seasons with the Miami Dolphins. Regardless, Minnesota evidently plans to give him a whirl at guard — a Vikingsian thing to do no matter the coaching staff.

Davis took RG1 snaps with the first team, so if rookie Ed Ingram or fellow free-agent Chris Reed want the job, they’ll have to usurp Davis. The former Dolphin exiting June’s minicamp as the top dog at right guard, at least for a while, was a little strange considering his tackle background, but the RG plan is still intact.

With Davis, Ingram, and Reed in the mix — may the best man win.

Booth was “the winner” from Vikings training camp on Day 1, and the smoke around his arrival didn’t subside on Day 2.

In fact, the hype increased — via Booth’s teammates.

And he possesses some swagger.

If training camp was adjudicated by two days alone — it’s not — Booth would take the cake. He’ll continue his quest to earn a starting cornerback job against the Green Bay Packers in Week 1, but he’ll have to defenestrate Patrick Peterson and Cameron Dantzler.

Anybody can have “a good day at camp.” Booth now has two such days under his belt.

Patrick Jones II, a second-year EDGE rusher drafted in Round 3, and D.J. Wonnum seem to be the early favorites to win the pass-rushing job after Danielle Hunter and Za’Darius Smith. Both men were featured with the second-teamers.

The Vikings are currently top-heavy for EDGE rushers — at least outwardly — with Hunter and Smith as the billboard guys. After them, a candidate among Jones, Wonnum, Janarius Robinson, Luiji Vilain, Andre Mintze, and Zach McCloud must emerge to snag playing time when Hunter and Smith are off the field.

And with the injuries histories of Hunter and Smith, the ascension of one or two of those defenders is vital. For now, it’s Jones II and Wonnum.

No Universal Masking Mandate in Los Angeles or Across California

The 4 ‘Now or Never’ Storylines for Vikings Final Preseason Game