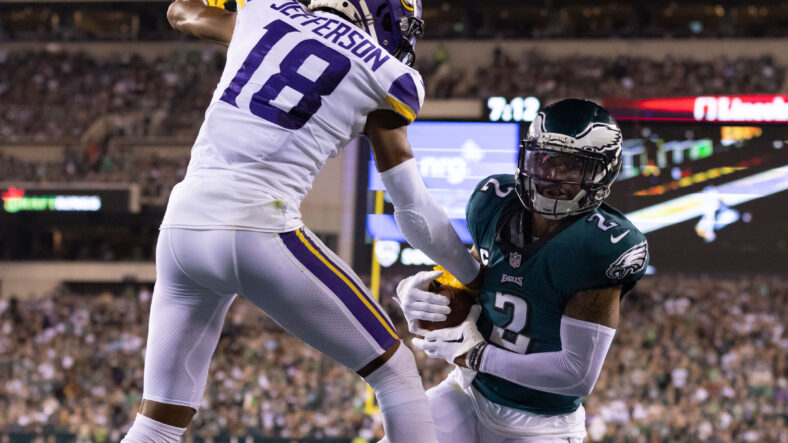 My Week 3 Vikings players to watch fared much better than my Week 2 effort. Although it wasn’t an explosive bounce-back game for Kirk Cousins, it turned into an improved performance in the end. He still had his troubles – particularly in the first half – but with the help of a dominant run game, he drove the Vikings down the field for four scores. Most importantly, he stepped up when it mattered to find K.J. Osborn for the winning touchdown.

Brian O’Neill continued his excellent start to the season and kept Aidan Hutchinson very quiet. Although outshone by Christian Darrisaw in this one, O’Neill is proving the Vikings were right to give him the big contract. Lastly, we have Cameron Dantzler who continues to frustrate with some very good play mixed in with some bad errors (which sums up the Vikings defense as a whole).

Onwards to my Week 4 Vikings players to watch.

Where else is there to start other than Justin Jefferson?

The footballing world will have their eyes on Jefferson to see how he responds after two quiet weeks. The Vikings will certainly look to get him the ball in their scripted plays to start the game. However, there is no reason to force anything. Minnesota’s offense is full of playmakers and if teams become obsessed with taking Jefferson out of the game, the rest of the offense can thrive.

Brian Baldinger offered a breakdown on how the Lions focused on Jefferson:

Baldinger doesn’t even go into the run game, which was very effective whether it was Dalvin Cook or Alexander Mattison. Opposing defenses will be forced to make decisions on how much attention they give to Jefferson. The Saints have an elite corner in Marshon Lattimore. Whether they decide to let Lattimore battle it out with Jefferson one on one – which would be fun for everyone to watch – or go for the double/triple coverage the Lions opted for remains to be seen.

If it’s the latter, it’s on the Vikings to do the damage with other players.

Once he got over his injury woes, Christian Darrisaw showed plenty of potential in his rookie season. Three games into this season and he is building on that potential.

Against the Lions in Week 3, PFF gave him an overall grade of 89.4. The Vikings offensive line has been good to start the season. They’ve done a better job at giving Kirk Cousins time in the pocket.

As a first-round left tackle, the expectation for Darrisaw is to become the star lineman. He is progressing towards that nicely. If he can stay healthy this year, he may develop a reputation as one of the best tackles in the league.

His primary opponent on Sunday may be Marcus Davenport – a first-round pick for the Saints back in 2018, who had a 9-sack year in 2021. However, he has yet to get to the quarterback in three games this season. Let’s hope Darrisaw can keep Davenport from getting his first sack for the year.

Hunter started the season with an excellent performance against the Green Bay Packers in Week 1. In that game he had a sack, QB hit, tackle for loss, and a pass deflection. Though his stats weren’t as impressive against the Lions, Hunter continues to look like one of the the best players on the Vikings defense.

Along with his partner on the opposite side – Za’Darius Smith – Hunter is key to the Vikings success on the defensive side of the ball. The Vikings aren’t blitzing much, relying on the front four to get pressure on opposing quarterbacks. The key issue with both Hunter and Smith is remaining healthy (Smith is questionable with a knee injury for the Saints games). If he is unable to play there will be even more onus on Hunter to carry the Vikings defense.

Here’s Who Is Dominating in EthereumPoW (ETHW) Ecosystem Right Now

Packers Defender Is Playing With Fire

The 3 Big QB Rumors in the Vikings Orbit This Week