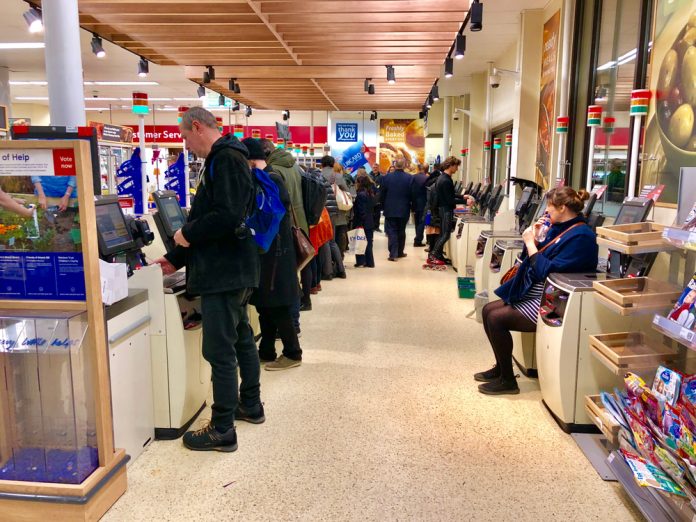 // 230,000 customers have signed a petition calling on Tesco to stop adding more self-service checkouts and bring back staff

Last week the UK’s largest retailer Tesco said it would be moving away from manned checkouts as it puts a greater focus on self service in the future, leaving many customers unhappy.

The supermarket said it would begin reducing the number of traditional manned checkouts available in-store due to a “lack of customer demand”.

However, the move is set to anger many shoppers who have signed a petition on change.org calling on Tesco to stop adding more self-service checkouts and bring back staff.

So far more than 230,000 customers have signed the petition.

Some customers, unhappy with the move have taken to social media claiming they will refuse to use self-checkouts if installing more of them means that existing staff will lose their jobs.

@mad_musings53 wrote: “Chef at work today was telling me he was moaning at the checkout at Tesco about all the self-checkouts now. Staff are actively asking customers to boycott them. If enough people don’t use them they will be ripped out and manned tills will replace them.”

@economics21st tweeted: “I hate the self-checkouts; always go to a person manning a till, say ‘hello’, and maybe have a short conversation. And they put the shopping through efficiently.”

A spokeswoman for Tesco told The Grocer: “We are proud to offer customers choice when it comes to checkouts, and after successful trials we are introducing new trolley-accessible self-service checkouts in some of our stores, which have more room and are easier to use for larger shops.

“Our colleagues and the friendly service they provide are absolutely vital to our stores – they will always be on hand to help our customers, and will continue to operate attended checkouts so that customers can choose the option they prefer.”

Speaking to The Grocer Steve Dresser, chief executive at Grocery Insider said the move was in-line with current supermarket trends.

He said: “[Supermarkets] are moving to dedicated checkouts rather than empty manned checkouts, which naturally are linked to the hours given to the front end.

“Of course, there are savings to be made losing the manned checkouts, but the reality is, you rarely see checkouts open these days en masse anyway, so it’s underutilised space. It’s not always positive for customers, however, as some may feel forced into self-service options.”

Indiana Supreme Court Does Not Quite Adopt the Apex Doctrine, But Comes Fairly Close