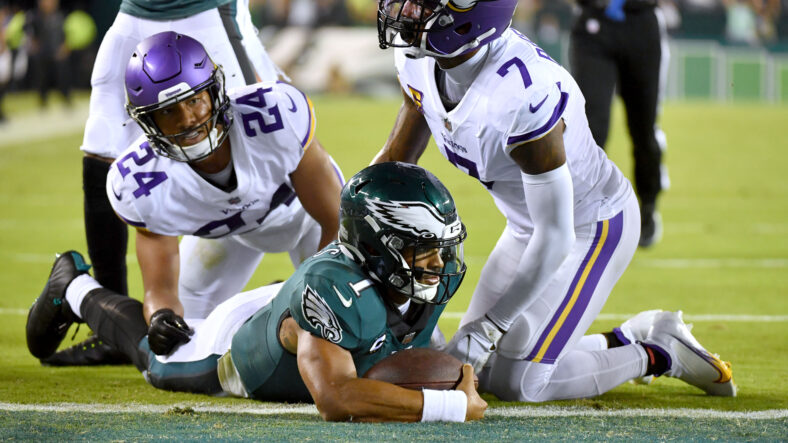 From a suggestion by a reader, we continue our “snap reactions” weekly piece detailing thoughts and analysis after a Minnesota Vikings game.

This will be off-the-cuff, a wee bit “random,” and hopefully insightful.

The Vikings fell to 1-1 after an embarrassing defeat on Monday Night Football to the Philadelphia Eagles, 24-7.

1 – The seven-month-long honeymoon with Kevin O’Connell had to end sometime, and that emphatically happened on Monday. There is no need to panic — it’s Week 2 — or succumb to utter vitriol, but the Vikings were humbled in Philadelphia.

2 – Minnesota nibbled at Super Bowl legitimacy after toppling the Green Bay Packers in Week 1, but any chatter in that arena was way too premature.

3 – For one game, the Vikings defense was unbecoming of a playoff contender, surrendering 486 total yards to Philadelphia. If this is closer to the “real” Vikings defense, the team will not reach the postseason. Plain and simple. The 2021 Vikings defense was not good — but it was better than the version on display versus the Eagles.

4 – The game was emotionally over when Irv Smith dropped the sure-thing touchdown in the 2nd Quarter. The teams could’ve traded haymakers thereafter if Smith scored, but that felt like a dagger.

5 – Patrick Peterson’s field goal block should’ve been a game-changing moment, but Kirk Cousins squandered it with a bad interception.

6 – The Eagles drafted Reagor, traded Reagor three weeks ago, and booed Reagor when he returned to the building. He did not request a trade, nor did he choose to be drafted by Philadelphia. Booing the man was nonsensical.

7 – The offense has made a curious decision to deviate away from Adam Thielen. It is outwardly unexplainable.

8 – For perspective, there is a chance that the Eagles are just that damn good.

9 – The Vikings have a wonderful punter. He averaged 49.2 yards per punt on Monday.

10 – Overall, Kirk Cousins stunk in the 2nd Half against the Eagles, and the performance cannot be repeatable. If it wasn’t his worst half as a Viking — the 2020 Indianapolis Colts game was bad — it was damn close.

11 – Believe it or not, the Eagles handed the Vikings about four separate opportunities to wiggle back into the game, but the purple team bungled them all.

12 – The good news? Vikings fans are familiar with gaffes on the road in primetime. This is nothing new. Perhaps this is the type of game to “get it out of your system” now rather than in December or January.