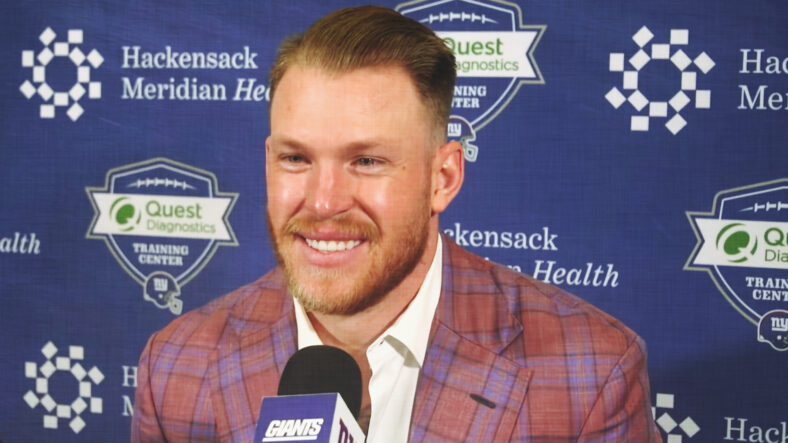 Kyle Rudolph departed the Minnesota Vikings 16 months ago for a stop with the New York Giants. Now, the longtime Vikings tight end is open to a reunion with the team that drafted him 11 years ago.

About three weeks ago, Rudolph told KFAN‘s Paul Allen he was interested in returning to the Vikings. And on Monday, Rudolph reiterated that opinion to FOX9 in Minneapolis.

On the prospect of rejoining the Vikings, Rudolph said:

“It would definitely interest me. This is home for us, certainly it would make life a lot easier for my wife and four kids to stay in the house that we live in here. This place is extremely special to us, that organization is special to us. To be able to come back and have an opportunity to play there again and fight to accomplish the only goal that I never accomplished as a Viking, win a championship, that would be great. But we’ll see.”

Rudolph, 32, was underutilized in the Giants disappointing 2021 offense and was not retained for a sequel. A possible relationship with the Kevin O’Connell version of the Vikings would net Rudolph a TE2 job behind Irv Smith Jr., who backed up Rudolph for two years in 2019 and 2020.

The 2022 Vikings could use Rudolph, nostalgia be damned. New general manager Kwesi Adofo-Mensah is evidently banking on a clean bill of health for the aforementioned Smith Jr. for 2022, as the players on the TE depth beneath the Alabama alumnus are unproven.

This is the Vikings current TE setup:

If added to the roster, Rudolph would theoretically replace Tyler Conklin, who “created” the Vikings skimpy TE depth chart in the first place. Conklin bolted in free agency to the New York Jets for a lucrative contract.

Rudolph would be an immediate upgrade to Mundt, Ellefson, Davidson, or Muse — unless one of those men is sitting on a Conklin-like breakout. In that regard, the Rudolph-to-Vikings chatter is beneficial to 2022 depth, not a plea on Vikings fans’ sentimental tear ducts.

After Adofo-Mensah eventually signs rookies Andrew Booth and Ed Ingram, who are the two unsigned rookies as of early July, the Vikings will have around $9 million in cap space — more than enough to onboard Rudolph.